The Soulmate by Sally Hepworth 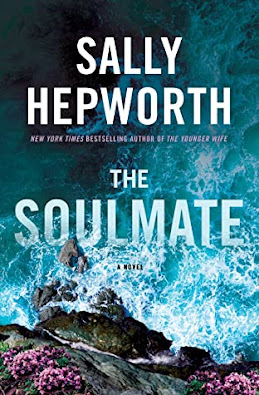 Get ready for a thrilling, addictive novel about marriage, betrayal, and the secrets that push us to the edge in Sally Hepworth's The Soulmate.

There’s a cottage on a cliff. Gabe and Pippa’s dream home in a sleepy coastal town. But their perfect house hides something sinister. The tall cliffs have become a popular spot for people to end their lives. Night after night Gabe comes to their rescue, literally talking them off the ledge. Until he doesn’t.

When Pippa discovers Gabe knew the victim, the questions spiral...Did the victim jump? Was she pushed?

And would Gabe, the love of Pippa’s life, her soulmate...lie? As the perfect facade of their marriage begins to crack, the deepest and darkest secrets begin to unravel.

Kindle Edition, 336 pages
Expected publication: April 4th 2023
by St. Martin’s Press
4/5 stars
Released in Australia last fall, Sally Hepworth's new book does not release in North America until April 4, 2023. This book starts with a bang when a woman is pushed/fell/juumped off a cliff behind the home of Pippa and Gabe. As the story unfolds, secrets are revealed, and it becomes clear that there is more than meets the eye.
I went into this book blind, which always makes for a more intriguing read. I was not disappointed with this domestic suspense mystery as it deals with many complex subjects that I will not reveal here (spoiler.)
Told from two different points of view. One is current day Pippa as she recalls her life with Gabe, her soulmate, how they met, and the story of their relationship is revealed. The other is from the woman who met her demise on that cliff, which was a unique viewpoint that gave a wider view as to what was going on.
The Soulmate is a story of family, past hurts, and secrets. It was intricately woven with some surprises along the way. It also had an unexpected ending that kept me on my toes. Hats off to Sally Hepworth for crafting such an engaging and captivating read.
My thanks to St. Martin's Press via NetGalley for providing me with a digital copy in exchange for an honest review.
Posted by Margaret @ JustOneMoreChapter at 12:32 PM