One Woman's War by Christine Wells 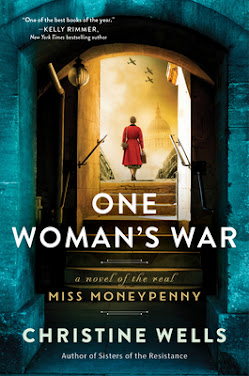 World War II London: When Victoire "Paddy" Bennett first walks into the Admiralty's Room 39, home to the Intelligence Division, all the bright and lively young woman expects is a secretarial position to the charismatic Commander Ian Fleming. But soon her job is so much more, and when Fleming proposes a daring plot to deceive the Germans about Allied invasion plans he requests the newlywed Paddy's help. She jumps at the chance to work as an agent in the field, even after the operation begins to affect her marriage. But could doing her duty for King and country come at too great a cost?
Socialite Friedl Stöttinger is a beautiful Austrian double agent determined to survive in wartime England, which means working for MI-5, investigating fifth column activity among the British elite at parties and nightclubs. But Friedl has a secret--some years before, she agreed to work for German Intelligence and spy on the British. When her intelligence work becomes fraught with danger, she must choose whether to remain loyal to the British and risk torture and execution by the Nazis, or betray thousands of men to their deaths.
Soon, the lives of these two extraordinarily brave women will collide, as each travels down a road of deception and danger leading to one of the greatest battles of World War II.

Paperback, 354 pages
Published October 4th 2022
by William Morrow/HarperCollins US
4/5 stars
Christine Wells is a new author for me. I’ve seen her around and know that she is big on historical fiction. This one grab my attention when I saw Miss Moneypenny written on the cover.
One Woman’s War follows the lives of two women through the second world war. One is Paddy, who ends up working with Commander Fleming, Ian Fleming (catch that?). The next is Friedl, an Austrian socialite, who is also the bearer of many secrets.
This was a very interesting strategic story about events of which I have only recently come to know about. It was an operation that saved thousands of  lives and one I won’t say more about because it is not written up in the blurb. But it is a very intriguing and strategic part in the fight against Hitler.
One Woman’s War is a story about two women, independent, determined, and also working for the greater good. It is well written and well researched and one I will recommend to those that enjoy a good historical fiction story, based on fact, and familiar characters.
Big thanks to HarperCollins Canada for a print arc of this book along with my apologies for being behind in my review.
Posted by Margaret @ JustOneMoreChapter at 9:00 AM