The German Wife by Kelly Rimmer 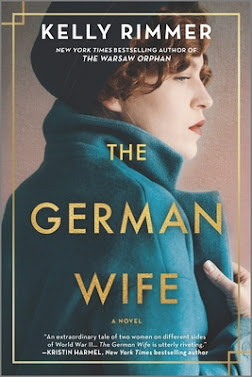 The New York Times bestselling author of The Warsaw Orphan returns with a gripping novel inspired by the true story of Operation Paperclip: a controversial secret US intelligence program that employed former Nazis after WWII.

Berlin, 1930—When a wave of change sweeps a radical political party to power, Sofie von Meyer Rhodes’s academic husband benefits from the ambitions of its newly elected chancellor. Although Sofie and Jürgen do not share the social views growing popular in Hitler’s Germany, Jürgen’s position with its burgeoning rocket program changes their diminishing fortunes for the better. But as Sofie watches helplessly, her beloved Berlin begins to transform, forcing her to consider what they must sacrifice morally for their young family’s security, and what the price for their neutrality will be.

Twenty years later, Jürgen is one of the many German scientists offered pardons for their part in the war, and taken to America to work for its fledgling space program. For Sofie, this is the chance to exorcise the ghosts that have followed her across the ocean, and make a fresh start in her adopted country. But her neighbors aren’t as welcoming or as understanding as she had hoped. When scandalous rumors about the Rhodes family’s affiliation with Hitler’s regime spreads, idle gossip turns to bitter rage, and the act of violence that results will tear apart Sofie’s community and her family before the truth is finally revealed.

Paperback, 464 pages
Published June 28th 2022
by Graydon House
5/5 stars
I am definitely late when it comes to reading The German Wife, which came out last summer. Kelly Rimmer has been on my radar set since reading, Truths I Never Told You, which I loved.

Beginning in 1950, Sofie is reunited with her husband, Jurgen in Huntsville, Alabama.  She is met with prejudices because of her German background, and if the rumours are to believed they are a family that supported Hitler. Alternating between her point of view and that of Lizzie brings about an explosive story with many layers.

This is a world war two story with a pov from within the SS that was gripping, heartfelt and definitely a unique setting. The early years for Lizzie are through the depression, the dust bowl, and eventually she is left to her own devices with a brother created an ambitious young woman.

The German Wife was my first read of 2023 and I love that it was a five star read. It was well written, the characters and the storyline were authentic, it was hard to put down and it was evident that the author did a lot of research, especially when you look at the line of history that was involved. I was unfamiliar with what took place within the rocket program, both in Germany and the US and I love learning history and being entertained with some awesome characters.

The German Wife is the story of friendship, family, heartache, and sacrifice. I don’t feel this review does justice to how much I enjoyed reading this book and can’t wait to see what the author comes up with next.

This book is part of my own personal library and book 1 in my 2023 Reading Off My Shelf Challenge
Posted by Margaret @ JustOneMoreChapter at 7:00 AM