All the Dangerous Things by Stacy Willingham 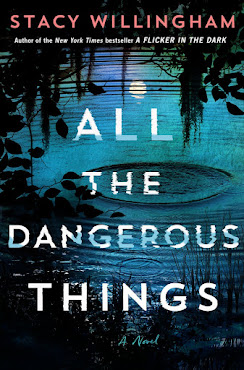 One year ago, Isabelle Drake's life changed forever: her toddler son, Mason, was taken out of his crib in the middle of the night while she and her husband were asleep in the next room. With little evidence and few leads for the police to chase, the case quickly went cold. However, Isabelle cannot rest until Mason is returned to her—literally.

Except for the occasional catnap or small blackout where she loses track of time, she hasn’t slept in a year.

Isabelle's entire existence now revolves around finding him, but she knows she can’t go on this way forever. In hopes of jarring loose a new witness or buried clue, she agrees to be interviewed by a true-crime podcaster—but his interest in Isabelle's past makes her nervous. His incessant questioning paired with her severe insomnia has brought up uncomfortable memories from her own childhood, making Isabelle start to doubt her recollection of the night of Mason’s disappearance, as well as second-guess who she can trust... including herself. But she is determined to figure out the truth no matter where it leads.

It's every parent's worst nightmare: the disappearance of a child, especially when it happens in the middle of the night while they are in the next room. The guilt and frustration that Isabelle has felt for the past year must have been unbearable.

I went into this psychological thriller expecting to be captivated, given the theme and the involvement of a child. However, the story moved slowly, jumping between timelines as Isabella tells her story, making her an unreliable narrator. As she struggles with lack of sleep, memories of the past, and hallucinations, she is left to face this trying time alone, with no one to support her.

Things picked up for me near the 3/4 mark, where the action happened, but it was a little too late. Although I didn't anticipate the conclusion, I had my suspicions.

All the Dangerous Things is a story of grief, guilt, and a mother's desperate attempt to find out what happened to her son without losing her sanity.

Released today, All the Dangerous Things is available in many different formats. I obtained my copy through my Book of the Month subscription for December.