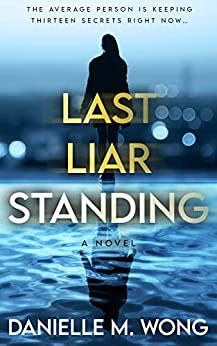 Vonny Kwan wakes up in a Nevada hospital, the victim of a hit-and-run accident she doesn’t remember. As she struggles to recover from her injuries, she learns that she also has no memory of the past nine years, including her marriage and what she was even doing in the West.

While she’s still reeling from the shock of her amnesia, two detectives visit and inform her that her husband, John, was recently murdered. As more information comes to light, Vonny grows increasingly suspicious of everyone around her.

Vonny realizes she must piece together the last decade to uncover the truth. The missing chunk of time holds secrets about the person she became, the mysterious man she fell for, and the life she never wanted.

Paperback, 300 pages
Published June 21st 2022
by RedAdept Publishing
2.5/5 stars
This book has been labelled a suspenseful thriller by the majority of people who have read it, awarding it 4 and 5 stars. Despite this, I'm not feeling that vibe, so I'm going against the majority yet again.
The story starts off with Vonny on the run from something unknown, but she is involved in a hit and run accident that lands her in the hospital. When she wakes up, she can't remember the past decade of her life - how she ended up clear across the country, estranged from her best friend, married, and then recently widowed when her husband is murdered. It seems like amnesia stories are a thing these days, as there have been a lot of them.
What didn't work for me was the slow burn. As Vonny goes home to San Francisco, her actions seem unnatural, repetitive, and somethings just don't make sense. There were a number of red herrings and suspicious characters, but it was the slow pace that I just could not get past.
This book is filled with short chapters, which made it easy to pick up and read a chapter here and there. However, I was not as captivated and enthralled with the story as I had hoped to be. It wasn't until the last 80% of the book that things started to really pick up and the pieces of the puzzle started to fit, but it was a little too late for my feelings to change.
This book was part of my 2023 reading off my shelf challenge and is book #4.
Posted by Margaret @ JustOneMoreChapter at 4:26 PM

Email ThisBlogThis!Share to TwitterShare to FacebookShare to Pinterest
Labels: 2023, 2023 Reading Off My Shelf, Danielle M. Wong, New to me author, Thriller/Suspense/Mystery