Review: When We Were Young & Brave by Hazel Gaynor 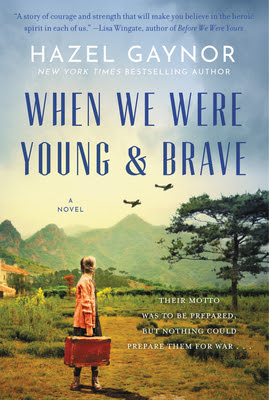 Their motto was to be prepared, but nothing could prepare them for war. . .

The New York Times bestselling author of The Girl Who Came Home sets her unforgettable new novel in China during WWII, inspired by true events surrounding the Japanese Army’s internment of teachers and children from a British-run missionary school.

China, December 1941. Having left an unhappy life in England for a teaching post at a missionary school in northern China, Elspeth Kent is now anxious to return home to help the war effort. But as she prepares to leave China, a terrible twist of fate determines a different path for Elspeth, and those in her charge.

Ten-year-old Nancy Plummer has always felt safe at Chefoo School, protected by her British status. But when Japan declares war on Britain and America, Japanese forces take control of the school and the security and comforts Nancy and her friends are used to are replaced by privation, uncertainty and fear. Now the enemy, and separated from their parents, the children look to their teachers – to Miss Kent and her new Girl Guide patrol especially – to provide a sense of unity and safety.

Faced with the relentless challenges of oppression, the school community must rely on their courage, faith and friendships as they pray for liberation – but worse is to come when they are sent to a distant internment camp where even greater uncertainty and danger await . . .

Inspired by true events, When We Were Young and Brave is an unforgettable novel about impossible choices and unimaginable hardship, and the life-changing bonds formed between a young girl and her teacher in a remote corner of a terrible war.

Paperback, 448 pages
Published October 6th 2020
by William Morrow Paperbacks
4/5 stars
China is not a usual place I visit in the literary world so this was a nice change.    I loved the unique setting for the education since I was ignorant of what was taking place in China when most of my knowledge involved Europe. War had already broken out in Europe and now, beginning in 1941, the Japanese have taken control of a missionary school.  Told from the POV of 10 year old Nancy and one of her teachers, Elspeth.
As each chapter alternated I was given a clear picture of what they went through and how they survived. This was a combo book/audiobook for me, with a different voice for Nancy and Elspeth.  Throughout the book Girl Guide mottoes are quoted and this group continued with the GG ceremonies and badge earnings.
When We Were Young & Brave is a story of courage, friendship and grief. It does have a YA feel but I think that just reflects the younger POV. This book was also released as The Bird in the Bamboo Cage. If you are looking for a WW2 read off the beaten track I recommend giving this one a go.
My copy from my bookshelf and part of my 2021 Reading Off My Shelf Challenge.
Posted by Margaret @ JustOneMoreChapter at 11:43 PM