Review: Are We There Yet? by Kathleen West 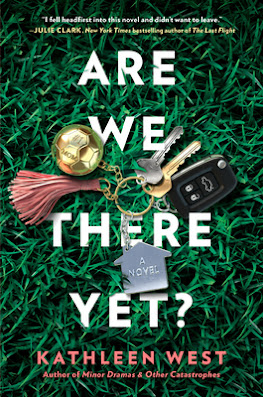 Among fake Instagram pages, long-buried family secrets, and the horrors of middle school, one suburban mom searches to find herself.

Alice Sullivan feels like she's finally found her groove in middle age, but it only takes one moment for her perfectly curated life to unravel. On the same day she learns her daughter is struggling in second grade, a call from her son's school accusing him of bullying throws Alice into a tailspin.

When it comes to light that the incident is part of a new behavior pattern for her son, one complete with fake social media profiles with a lot of questionable content, Alice's social standing is quickly eroded to one of "those moms" who can't control her kids. Soon she's facing the very judgement she was all too happy to dole out when she thought no one was looking (or when she thought her house wasn't made of glass).

Then her mother unloads a family secret she's kept for more than thirty years, and Alice's entire perception of herself is shattered.

As her son's new reputation polarizes her friendships and her family buzzes with the ramification of her mother's choices, Alice realizes that she's been too focused on measuring her success and happiness by everyone else's standards. Now, with all her shortcomings laid bare, she'll have to figure out to whom to turn for help and decide who she really wants to be.

Kindle Edition
Expected publication: March 16th 2021
by Berkley Publishing
3/5 stars
Are We There Yet? explores family life with tweens, it made me happy my kids are long past that stage.  Here it probes how far these parents go to control social media and how smart kids are to get around it.
Though it's told with a number of different povs, it's not as daunting as it sounds but  rather it worked to get this reader into the minds of both the kids and moms, to see/understand motivations.  I can say that I wasn't a big fan of most of the characters.  Between their actions and decisions being made just made them appear out of control and impulsive.  They almost seemed more concerned about reputation vs fixing/accepting what was going on.
I liked the writing and shorter chapters, even though I didn't like the players I was genuinely interested in what was happening and how this book would end.  There was one story-line that had me wondering if it was necessary but it did enhance some character traits but still left me wanting to skip those chapters.
Are We There Yet? releases on March 16th.  My thanks to Berkley Publishing for a digitial ARC in exchange for a honest review.
Posted by Margaret @ JustOneMoreChapter at 7:46 PM