Review: The Room on Rue Amélie by Kristin Harmel 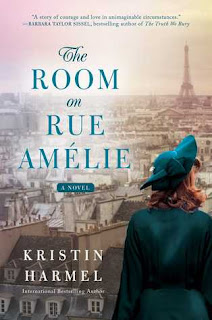 For fans of Kristin Hannah’s The Nightingale and Martha Hall Kelly’s Lilac Girls, this powerful novel of fate, resistance, and family—by the international bestselling author of The Sweetness of Forgetting and When We Meet Again—tells the tale of an American woman, a British RAF pilot, and a young Jewish teenager whose lives intersect in occupied Paris during the tumultuous days of World War II. When newlywed Ruby Henderson Benoit arrives in Paris in 1939 with her French husband Marcel, she imagines strolling arm in arm along the grand boulevards, awash in the golden afternoon light. But war is looming on the horizon, and as France falls to the Nazis, her marriage begins to splinter, too.

Charlotte Dacher is eleven when the Germans roll into the French capital, their sinister swastika flags snapping in the breeze. After the Jewish restrictions take effect and Jews are ordered to wear the yellow star, Charlotte can’t imagine things getting much worse. But then the mass deportations begin, and her life is ripped forever apart.

Thomas Clarke joins the British Royal Air Force to protect his country, but when his beloved mother dies in a German bombing during the waning days of the Blitz, he wonders if he’s really making a difference. Then he finds himself in Paris, in the shadow of the Eiffel Tower, and he discovers a new reason to keep fighting—and an unexpected road home.

When fate brings them together, Ruby, Charlotte, and Thomas must summon the courage to defy the Nazis—and to open their own broken hearts—as they fight to survive. Rich with historical drama and emotional depth, this is an unforgettable story that will stay with you long after the final page is turned.

This book had me at 'for fans of The Nightingale and The Lilac Girls', everything after that was a blur - I loved both of those books.  With that kind of endorsement my expectation level was elevated.

The synopsis above doesn’t hold back much telling what this book is about, I'll confess to not being a huge fan of long synopsis's like that, there is too much of a risk of spoilers and the unveiling of storylines I would rather discover for myself.

The Room on Rue Amelie felt like more of a love story with the war as the backdrop. Well I enjoyed this book I felt that it was lacking the depth it needed to complete on the scale with The Nightingale. With so many glowing reviews I wondered what I was missing, but rather struggled to connect with the characters and found some situations hard to swallow.  It was still an interesting read and I could tell that the author did a lot of research here.  World War 2 in Paris is always heartbreaking to read about and I love to hear about those who did all they could to be part of the resistance.


My thanks to the publisher (via Netgalley) for an advanced copy of this ebook.
Posted by Margaret @ JustOneMoreChapter at 10:04 PM