Review: Come from Away by Genevieve Graham 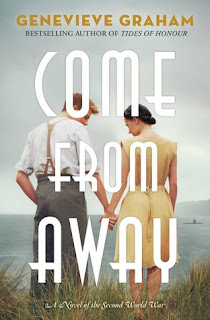 From the bestselling author of Tides of Honour and Promises to Keep comes a poignant novel about a young couple caught on opposite sides of the Second World War.

In the fall of 1939, Grace Baker’s three brothers, sharp and proud in their uniforms, board Canadian ships headed for a faraway war. Grace stays behind, tending to the homefront and the general store that helps keep her small Nova Scotian community running. The war, everyone says, will be over before it starts. But three years later, the fighting rages on and rumours swirl about “wolf packs” of German U-Boats lurking in the deep waters along the shores of East Jeddore, a stone’s throw from Grace’s window. As the harsh realities of war come closer to home, Grace buries herself in her work at the store.

Then, one day, a handsome stranger ventures into the store. He claims to be a trapper come from away, and as Grace gets to know him, she becomes enamoured by his gentle smile and thoughtful ways. But after a several weeks, she discovers that Rudi, her mysterious visitor, is not the lonely outsider he appears to be, but someone else entirely—someone not to be trusted. When a shocking truth about her family forces Grace to question everything she has so strongly believed, she realizes that she and Rudi have more in common than she had thought. And if Grace is to have a chance at love, she must not only choose a side, but take a stand.

Come from Away is a mesmerizing story of love, shifting allegiances, and second chances, set against the tumultuous years of the Second World War.

I have read many books on both World Wars but never with Canada as the location, in fact finding any Canadian historical fiction is scarce.  Genevieve Graham lives on the East coast of Canada and her passion and knowledge of the history of that location shines through in her books.  This is my third book and again I knew it would be a treat to read.

Even though this story began in Tides of Honour,  it is a standalone - but I still recommend reading her other works.  Where Tides took place during World War One, Come from Away takes places during the Second World War.

I was educated reading this one, knowing nothing of the German U-boats off the east coast of Canada and the impact it had on the residents. This story revolves around the POV's of both Rudi and Grace, allowing me to get inside their heads and feel the struggles they were going through, not just the internal but with those involving others.  The war put everyone on edge and friendships would naturally be put to the test. The author clearly showed the effects this war had on those that survived, both those with seen and unseen wounds.

Come from Away is a story of hope, second chances, and healing.  It is vividly written clearly showing the effects this war had on Canadians on Canadian soil, it was a refreshing change of location and one I enjoyed.  There are some lovely Author's Notes/Q & A at the end that just finished this book off nicely.


Thank you to the publisher (via Netgalley) for an advanced copy of Come from Away.