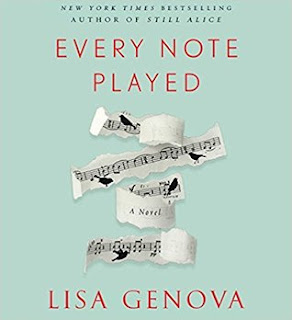 A virtuoso performance by the New York Times bestselling author of Still Alice, Lisa Genova brings her signature “gut-wrenching and memorable” (Library Journal, starred review on Inside the O’Briens) prose to this stunning novel about finding harmony amidst the most tragic of situations.

Richard, an accomplished concert pianist, has already suffered many losses in his life: the acrimonious divorce from his ex-wife, Karina; the estrangement of his daughter, Grace; and now, a devastating diagnosis: ALS, a degenerative neurological disorder also known as Lou Gehrig’s disease.

The relentlessly progressive paralysis of ALS begins in the cruelest way possible—in his hands. As Richard becomes more and more locked inside his body and can no longer play piano or live on his own, Karina steps in as his reluctant caregiver. Paralyzed in a different way, Karina is trapped within a prison of excuses and blame, stuck in an unfulfilling life as an after-school piano teacher, afraid to pursue the path she abandoned as a young woman. As Richard’s muscles, voice, and breath fade, the two struggle to reconcile their past before it’s too late.

Poignant, powerful, and with the staggering insight of Jojo Moyes’s Me Before You, Lisa Genova does for ALS “what Still Alice did for Alzheimer’s” (Huffington Post) and delivers a masterful exploration of what it means to find yourself within the most shattering of circumstances.

Lisa Genova is known for her emotional, medical stories that pull at the heartstrings. I still think about Still Alice and I read that when it first came out.

While her last book didn’t really float my boat I knew this one would, for a number of reasons. I’ve been in the role of caregiver in the past so I could empathize here and was prepared for it to hit close to home.  As well as knowing two lovely women that were stricken with ALS, it’s a terrible disease and this book really brings to light its horrific progression.

Told from the POV of both Richard and Karina was what made this a totally authentic and emotional read.  The author didn't hold back as she described the progression of ALS, it is blatantly obvious the amount of research that went into Every Note Played and while at times the symptoms were told matter of factly it wasn't in a clinical unfeeling manner but with compassion and respect.  Even at the end in the author's notes Genova talks about those she knew and lost to ALS, her research and even how to help, making this book all the more gripping.

The audio version was great and I highly recommend it, it was addictive and another Lisa Genova that will stay with me.
Posted by Margaret @ JustOneMoreChapter at 11:08 PM