Review: Judah's Wife: A Novel of the Maccabees (The Silent Years #2) by Angela Elwell Hunt 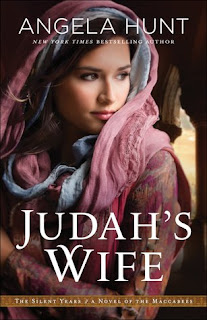 Seeking peace and safety after a hard childhood, Leah marries Judah, a strong and gentle man, and for the first time in her life Leah believes she can rest easily. But the land is ruled by Antiochus IV, descended from one of Alexander the Great's generals, and when he issues a decree that all Jews are to conform to Syrian laws upon pain of death, devout Jews risk everything to follow the law of Moses.

Judah's father resists the decree, igniting a war that will cost him his life. But before dying, he commands his son to pick up his sword and continue the fight--or bear responsibility for the obliteration of the land of Judah. Leah, who wants nothing but peace, struggles with her husband's decision--what kind of God would destroy the peace she has sought for so long?

The miraculous story of the courageous Maccabees is told through the eyes of Judah's wife, who learns that love requires courage . . . and sacrifice.

Told with alternating points of view, Judah's Wife is a story of the silent years between the Old and New Testaments, Malachi and Matthew.  The Maccabees is a name I have heard of but know nothing about and that's what I love about reading historical fiction - digging into the past in an informative and entertaining manner.  Discovering a new author along the way is also great.

Angela Hunt has written an emotional story about a young woman named Leah.  Growing up in an abusive home she longs for peace and in her marriage she might just have found that.  But it's short lived, bringing back memories and fears for the future.

Judah wants nothing more than to please his wife but his father's dying wish takes him in a different direction.

Getting a view from both Leah and Judah gave me a real sense of the times and what the Jews endured.  Judah's Wife is well researched, it's a book about forgiveness, courage and devotion. Fans of Bibical fiction will enjoy this one.

Book has been provided courtesy of Baker Publishing Group and Graf-Martin Communications Inc.
Posted by Margaret @ JustOneMoreChapter at 11:34 PM