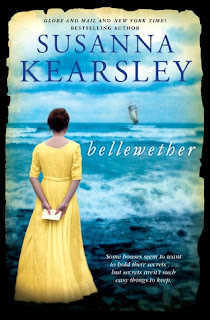 Some houses seem to want to hold their secrets.

It’s 1759 and the world is at war, pulling the North American colonies of Britain and France into the conflict. The times are complicated, as are the loyalties of many New York merchants who have secretly been trading with the French for years, defying Britain’s colonial laws in a game growing ever more treacherous.

When captured French officers are brought to Long Island to be billeted in private homes on their parole of honour, it upends the lives of the Wilde family—deeply involved in the treasonous trade and already divided by war.

Lydia Wilde, struggling to keep the peace in her fracturing family following her mother’s death, has little time or kindness to spare for her unwanted guests. French-Canadian lieutenant Jean-Philippe de Sabran has little desire to be there. But by the war’s end they’ll both learn love, honour, and duty can form tangled bonds that are not broken easily.

Their doomed romance becomes a local legend, told and re-told through the years until the present day, when conflict of a different kind brings Charley Van Hoek to Long Island to be the new curator of the Wilde House Museum.

Charley doesn’t believe in ghosts. But as she starts to delve into the history of Lydia and her French officer, it becomes clear that the Wilde House holds more than just secrets, and Charley discovers the legend might not have been telling the whole story...or the whole truth.

This is my 4th Susanna Kearsley book, she is a Canadian author and one of my favorites.  Her experience as a Museum curator and love of history is evident in her writing.  Her books have unique storylines with some romance and a touch of the supernatural mixed in.  I have yet to be disappointed in anything she has penned.

That being said I found Bellewether to be more of a quieter book, there isn't a lot of action, it's pacing was slow but still a story that kept my attention while peaking my interest into historic facts on both sides of the border.  Honestly I had never heard of the Seven Years War, billeted war prisoners or residential schools (that last one left me rather shocked). It's one of the reasons historical books are my go to, being educated at the same time as being entertained.

Bellewether is told from 3 different POV's, present day Charley and from 1759 we hear from Lydia and Jean Philippe.  It's always a treat hearing from the male characters, I feel it adds much to the story.  The romance part played out nicely with no 'insta love' and mushy 'best looking guy I've ever seen' comments, it was realistic and believable.

Bellewether is a story of war, grief, love, secrets, mystery, reconciliation and so much more.  Susanna Kearsley brings to light an era loosely based on her own family history, the author's notes are well worth reading with many book recommendation of further interest.


My thanks to the publisher (via Netgalley) for an advance earc in exchange for an honest review.

Posted by Margaret @ JustOneMoreChapter at 10:30 PM