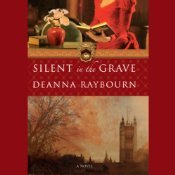 "LET THE WICKED BE ASHAMED, AND LET THEM BE SILENT IN THE GRAVE."

These ominous words, slashed from the pages of a book of Psalms, are the last threat that the darling of London society, Sir Edward Grey, receives from his killer. Before he can show them to Nicholas Brisbane, the private inquiry agent he has retained for his protection, Sir Edward collapses and dies at his London home, in the presence of his wife, Julia, and a roomful of dinner guests. Prepared to accept that Edward's death was due to a long-standing physical infirmity, Julia is outraged when Brisbane visits and suggests that Sir Edward has been murdered. It is a reaction she comes to regret when she discovers the damning paper for herself, and realizes the truth.

Determined to bring her husband's murderer to justice, Julia engages the enigmatic Brisbane to help her investigate Edward's demise. Dismissing his warnings that the investigation will be difficult, if not impossible, Julia presses forward, following a trail of clues that lead her to even more unpleasant truths, and ever closer to a killer who waits expectantly for her arrival.

I am a big fan of Deanna Raybourn's Victoria Speedwell series, I love Victoria, the intricate mysteries and the writing.  My fear with starting this series was how similar these 2 characters would be and if all the hype about Lady Julia Grey put my expectation level on an elevated path.

I went with the audio version for this one, Ellen Archer is the reader and did a great job.  Not all books work in audio format but this one did.

I've heard about the opening line of Silent in the Grave and  also think it sets the tone and gets this book off to a roaring start.


"To say that I met Nicholas Brisbane over my husband's dead body is not entirely accurate. Edward, it should be noted, was still twitching upon the floor."

This isn't a cozy mystery, coming in between 440-509 pages (depending on what version you read) leaves plenty of room to get to know Julia, Brisbane and of course Edward.  There are many layers here that kept me dawning my sleuth hat as I endeavored to solve the crime before Julia did.  Though I found it dragged somewhat in the middle it kept me captivated, curious as to the direction it was heading.  As the mystery twisted and turned, with the right amount of wit it came to a satisfying ending.  Definitely a series I will continue to read.

As you can see I am a big fan, clicking on the covers will take you to my review.  I just love the covers for the Victoria Speedwell Series!