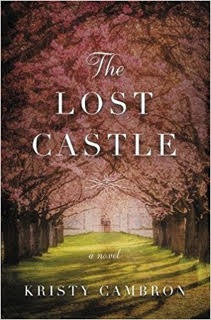 Launching a brand-new series, Kristy Cambron explores the collision of past and present as she discovers the ruins of a French castle, long lost to history.

A thirteenth century castle, Chateau de Doux Reves, has been forgotten for generations, left to ruin in a storybook forest nestled deep in France's picturesque Loire Valley. It survived a sacking in the French Revolution, was brought back to life and fashioned into a storybook chateau in the Gilded Age, and was eventually felled and deserted after a disastrous fire in the 1930s.

As Ellie Carver sits by her grandmother's bedside, she hears stories of a castle . . . of lost love and a hidden chapel that played host to a secret fight in the World War II French resistance. But her grandmother is quickly slipping into the locked-down world of Alzheimer's, and Ellie must act fast if she wants to uncover the truth of her family's history.

Sparked by the discovery of a long forgotten family heirloom, Ellie embarks on a journey to French wine country to uncover the mystery surrounding The Sleeping Beauty--the castle so named for Charles Perrault's beloved fairy tale--and unearth its secrets before they're finally silenced by time.

Set in three different time periods--the French Revolution, World War II, and present day--The Lost Castle is a story of loves won and lost, of battles waged, and an enchanted castle that inspired the epic fairy tales time left behind.

The Lost Castle is not your average dual time period book, because this book has three time periods. The Sleeping Beauty is a 13th century castle with many stories to tell.

The Chateau de Doux Reves survives the French Revolution but not a fire in the 1930’s. Left abandoned the French resistance uses its shell to hide in. The current day story centers around Ellie and her quest to unravel the story behind a mysterious picture of her grandmother taken at the ruins.

The synopsis above does a great job of descibing the stories here without me going into more detail.  Suffice to say I really enjoyed this book.  Each of the characters were unique, their journeys played out nicely and the landscape was easy to visualize.  As each women searches for meaning in different ways they battle through war, whether physically or through another their lives are changed because of it.

The Lost Castle is a story of love and loss, strength and determination. The author’s passion for this story was evident with vivid descriptive detail and an interesting story where all the pieces fit together nicely.

This looks to be the first book in a new series called The Lost Castles, a series I will continue to read. This is my second book by Kristy Cambron and my favorite so far.

Thanks to TLC Tours and Netgalley for an advanced copy in exchange for my honest review.

click on banner for more stops on this tour
Posted by Margaret @ JustOneMoreChapter at 7:33 AM