Excerpt: We Own the Sky by Luke Allnutt 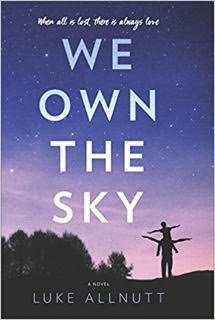 “We looked down at the cliff jutting into the sea, a rubber boat full of kids going under the arch, and then you started running and jumping through the grass, dodging the rabbit holes, shouting at the top of your voice, so I started chasing you, trying to catch you, and we were laughing so hard as we ran and ran, kicking up rainbow showers in the leaves.”

Rob Coates feels like he’s won the lottery of life. There is Anna, his incredible wife, their London town house and, most precious of all, Jack, their son, who makes every day an extraordinary adventure. But when a devastating illness befalls his family, Rob’s world begins to unravel. Suddenly finding himself alone, Rob seeks solace in photographing the skyscrapers and clifftops he and his son Jack used to visit. And just when it seems that all hope is lost, Rob embarks on the most unforgettable of journeys to find his way back to life, and forgiveness.

We Own the Sky is a tender, heartrending, but ultimately life-affirming novel that will resonate deeply with anyone who has suffered loss or experienced great love. With stunning eloquence and acumen, Luke Allnutt has penned a soaring debut and a true testament to the power of love, showing how even the most thoroughly broken heart can learn to beat again.

“Anna, can you talk, you’re not gonna fucking believe this.” I was standing outside a meeting room in an office on Old Street.

“Is everything all right?” she said.

I was trying to keep my voice down as the corridor walls were thin. “They want it. The software. They want to buy the fucking software.”

A pause, a faint crackle on the line.

“No, not at all. I can’t talk for long, but they’re in the room now, looking at the papers. I didn’t even have to pitch it. They just want it. They get it.”

The company, Simtech, had been recommended by a pro¬grammer friend. A start-up run by someone called Scott, who had been a few years ahead of me at Cambridge.

“That’s absolutely fantastic, Rob. Brilliant news,” she said, but it was as if she was waiting for me to tell her something else.

“And guess how much they want to pay for it?”

“One and a half million.”

Even Anna couldn’t contain her excitement. “As in sterling?”

Anna took a deep breath, and I could hear a shuffling sound, what sounded like her blowing her nose.

“I know, me too. We have to celebrate tonight.”

“Yes, of course,” she said, a note of caution in her voice. “I don’t understand, though. So what actually happened? What did they…”

I could hear the scraping of chairs on the floor of the meet¬ing room, the sound of people standing up.

“Okay,” she said, “but don’t do anything hasty, Rob. Don’t sign anything, okay? Say you need to discuss everything with your lawyers.”

The grimy heat hit me as soon as I left the building. For a moment, I just stood, blinking into the sunlight, watching the lanes of traffic hurtle around the roundabout, the happy, dirty din of London.

The last nine months hadn’t been easy. Living in Clapham in a rented ground-floor flat that Anna paid for. While I worked late through the night—caffeine-fueled coding binges—Anna got up early for work. We didn’t see much of each other, a wave in our bathrobes on the landing—her getting up, me turning in. It was just for a while, we agreed. It would be better when her training period was over, when I had finished writing my software.

Anna loved her job, working in a department that audited the bank’s adherence to financial regulations. It was perfect for her: a stickler for the rules, she knew where the bank could trip up. And because she knew the rules, she also knew how to get around them, the legal shortcuts and backdoors, the get-out clauses that lurked in the small print. Her talents were recog¬nized, and she was promoted and fast-tracked for management in just her first six months.

I was still buzzing and didn’t know what to do with myself, so I started walking toward Liverpool Street, the skyscrap¬ers eclipsing the sun. I tried to call Anna but her phone was switched off, so I ducked into a pub for a beer.

I knew I was right. All those twenty- and thirty-hour cod¬ing sessions, sleeping under an old blanket on the floor. I told people smartphones would change everything, and they rolled their eyes. But it was true. Maps used to be static, something we kept folded up in a backpack, or in the glove compartment of the car. Now they would always be with us, customized, dynamic, on our phones, in our pockets.

The beer began to have a calming effect, and it felt like a great weight had been lifted. It hadn’t been the plan—Anna paying the rent and lending me the money to buy a new suit. She didn’t say it outright, but I knew what she thought. That I should do a business course, an internship at a gaming company, that I should put my silly maps idea on the backburner for now.

It grated. Because everyone always thought that it would be me, that I would be the precocious wunderkind dripping in cash. Because I had a track record. I told people I would grad¬uate at the top of my class—and I did. I told my disbelieving tutors I would win the annual Cambridge hacking competi¬tion—and I did, every year. But London hadn’t been like that. While Anna flew off to Geneva every two weeks for work, I sat on the sofa in my boxer shorts watching Countryfile and eating leftover rice from Chicken King.

My phone rang. It was Anna.

“How did you guess?”

“I had training and I’ve finished early. Do you want to come and meet me at Liverpool Street?”

Be sure to click on the link for more stops on this tour, along with links to purchase this book and how to connect with the author.   Also come back on April 18th when I will post a review of We Own the Sky here

Posted by Margaret @ JustOneMoreChapter at 10:48 PM