Review: I Was Anastasia by Ariel Lawhon 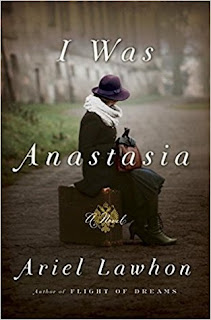 Countless others have rendered their verdict. Now it is your turn.


Russia, July 17, 1918
Under direct orders from Vladimir Lenin, Bolshevik secret police force Anastasia Romanov, along with the entire imperial family, into a damp basement in Siberia where they face a merciless firing squad. None survive. At least that is what the executioners have always claimed.

Germany, February 17, 1920
A young woman bearing an uncanny resemblance to Anastasia Romanov is pulled shivering and senseless from a canal in Berlin. Refusing to explain her presence in the freezing water, she is taken to the hospital where an examination reveals that her body is riddled with countless, horrific scars. When she finally does speak, this frightened, mysterious woman claims to be the Russian Grand Duchess Anastasia.

Her detractors, convinced that the young woman is only after the immense Romanov fortune, insist on calling her by a different name: Anna Anderson.

As rumors begin to circulate through European society that the youngest Romanov daughter has survived the massacre, old enemies and new threats are awakened.

Sometimes it's a good idea to cave to peer pressure, which is exactly what I did here.  Though having heard the Romanov name and Anastasia I still wasn't really familiar with their history.  With nothing to base any preconceived knowledge I jumped right in.  Boy what a ride I Was Anastasia was, it far exceeded my expectations, right from the first page I was mesmerized and kept thinking about the whole family when not reading.  It was a struggle to stay away from google.

With two time periods taking place the author did something I have never encountered before.  The later time period goes back in time to meet up back in 1918.  Sounds weird?  Yea maybe, but it really worked here and I totally get why the author did it that way.  It did take a few chapters to get used to it, but after that I was so engrossed that everything just flowed nicely.

There is a lot of historical detail and its evident that the author did a lot of research and has a passion for this story.  Where she took liberties she explained in the authors notes and I highly recommend reading them.  This book was exquisitely written, a few scenes were hard to read but Ariel Lawhon really transported me back in time and I feel that I can't adequately put into words my feelings. I loved this book, it opened my eyes to a part of history I knew nothing about.  Definitely made my 'best of 2018' list and has me searching out her previous books.

Thanks to the publisher (via Edelweiss) for an advanced copy.
Posted by Margaret @ JustOneMoreChapter at 9:44 PM