I am thrilled to have Aimie K. Runyan here at JustOneMoreChapter today.  I've read all 3 of her books and look forward to many more.  Be sure to scroll down to the bottom for links to her social media sites and links to my reviews. 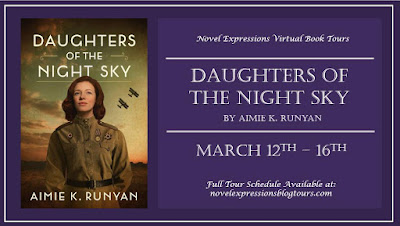 Aimie, I am going to regress a little here and go back to your series, Daughters of New France. This Canadian is always on the lookout for HF taking place in Canada and any books I have found were usually written by a Canadian. You aren’t Canadian, what made you pick this story to write about?


I am actually French-Canadian by ancestry on my dad’s side, and learned (after writing my Master’s thesis on these remarkable female pioneers) that I’m descended from more than a dozen filles du roi. Apparently blood won out! I first learned about these women when I was working on my MA in French at Indiana University. I was taking a course on Canadian Civ, and the professor spent perhaps a quarter of an hour discussing female emigration to New France. I was also taking a creative writing course for fun, and was immediately struck that these women deserved to be known. I wrote a short story from the POV of the character that would become Nicole, and a decade later, decided to finish the book!

With Daughters of the Night Sky you take the big leap to Russia during World War 2, again what drove you in that direction?


Practicality, in many respects. And persistent friends. I knew I needed to choose a marketable era (like WWII) for a few projects to gain the readership I’d need to have success selling books that take place in lesser-known times and places. Several friends sent me articles about the Night Witches when I was idea-hunting, and I was captivated by their bravery. Once I started writing the synopsis, it was a concept that wouldn’t let go.

Did you get a chance to visit the areas you wrote about?


Sadly, no. A trip to Russia wasn’t in the budget. I have been to Germany and France, which was helpful for the last few chapters.

So  how did you go about a getting a feel for that era.


I *have* been to Alaska, which shares a lot with Russia in terms of climate and geography, so that was very useful for descriptions. I relied a lot on personal narratives from the Night Witches, and also had the chance to fly in an open-cockpit WWII-era biplane. That was the highlight of my research for sure!

What is one thing you hope readers will take away from this story?


Wars are not fought exclusively by men. There have been thousands of women in the last century who answered their countries’ calls for aid in their hour of need, and who did so without reservation. They gave their lives freely to protect their families and their freedoms. And while the men who fought were also heroes, not all can say they volunteered their service as freely as every single woman who took up arms for her country.

What can you readers look forward to in the future?


I’ve just turned in Girls on the Line, which is a story of the American telephone operators who served in France during the Great War. This book was absolutely a love affair of mine, and I can’t wait for you all to read it in early November, just in time for the 100th anniversary of the armistice!

Aimie when this interview posts you will be in the sunny south, care to share what books you are packing?


Quite a few! I’m taking early review copies of Carousel Beach by Orly Konig, In Praise of Difficult Women by Karen Karbo, The Optimists Guide to Letting Go by Amy E. Reichert, and a whole Kindle-full of books I’ve been wanting to read for ages!!!

A novel—inspired by the most celebrated regiment in the Red Army—about a woman’s sacrifice, courage, and love in a time of war.

Russia, 1941. Katya Ivanova is a young pilot in a far-flung military academy in the Ural Mountains. From childhood, she’s dreamed of taking to the skies to escape her bleak mountain life. With the Nazis on the march across Europe, she is called on to use her wings to serve her country in its darkest hour. Not even the entreaties of her new husband—a sensitive artist who fears for her safety—can dissuade her from doing her part as a proud daughter of Russia.

After years of arduous training, Katya is assigned to the 588th Night Bomber Regiment—one of the only Soviet air units comprised entirely of women. The Germans quickly learn to fear nocturnal raids by the daring fliers they call “Night Witches.” But the brutal campaign will exact a bitter toll on Katya and her sisters-in-arms. When the smoke of war clears, nothing will ever be the same—and one of Russia’s most decorated military heroines will face the most agonizing choice of all. 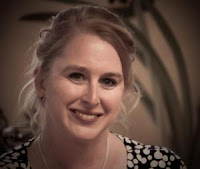 Aimie K. Runyan writes to celebrate history’s unsung heroines. She is the author of two previous historical novels: Promised to the Crown and Duty to the Crown, and hard at work on novel #4.

She is active as an educator and a speaker in the writing community and beyond.

She lives in Colorado with her wonderful husband and two (usually) adorable children.

To learn more about Aimie and her work, please visit her www.aimiekrunyan.com


Posted by Margaret @ JustOneMoreChapter at 11:40 PM