Guestpost: Grendel’s Mother: The Saga of the Wyrd-Wife by Susan Signe Morrison

I am pleased to have Susan Signe Morrison visit JustOneMoreChapter today with this special guestpost.  Be sure to click on the banner at bottom of post for more stops on this blog tour, which includes reviews and a giveaway. 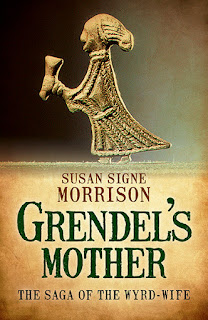 My historical novel, Grendel’s Mother: The Saga of the Wyrd-Wife, tells the story of the famous Old English heroic epic, Beowulf, from the point of view of the women. “Wyrd” means “fate”—and the females in this hyper-masculine world often seem fated to be victimized.  One in particular, the mother of the monster Grendel, has been particularly villainized until recent feminist interpretations. I wanted to explore her life, her motivations, and her backstory.  The only way to do that, it seemed to me, was to write a novel.

Fiction permitted me the freedom to imagine.  I can imagine in non-fiction as well, but the prose and poetry of a world conjured out of my fantasy compelled me to pursue writing a novel.  And pursue it I did.  Though published in September 2015, I began writing it in 1998.  At the time, my daughter was two years old. At the time, I had taught the poem Beowulf for a number of years.  Perhaps it was becoming a mother myself that jolted me out of my conventional form of writing—academic scholarship—to start to pen (and I mean pen!) this Anglo-Saxon world fabricated out of my fantasy.  I felt duty-bound to explore what a fellow mother might have gone through and to plumb her emotional depths and personal and social triumphs.

Yet the book took years to produce.  I wrote it in fits and starts.  Sometimes writing steadily for a few months, then abandoning to for years as other projects—and children—came along.  At one point the manuscript even had a frame tale set in the 20th century; the novel transitioned between the medieval and the modern periods.  I finally abandoned that idea.  I always feel annoyed when an author pulls me out of the past into a more contemporary setting and I didn’t want to do that to my readers.

I also incorporated poems, layered in among the prose passages. After all, in the original work, from a manuscript dating from about the year 1000, a minstrel or scop periodically sings of legendary figures.  Why couldn’t I do that as well with my work? Only I focus on the women and their plight. Sometimes a bit of verse would float into my head and I would write it down, develop it, and craft it into poetry that echoes Old English traditions and conventions.

My novel is a modern novel for a contemporary audience—but I wanted my readers to feel the chill of the Danish landscape, the thrill of battle, and the poignancy of women and their lives in this violent and turbulent environment. Ultimately, we feel the pain and happiness of women from one thousand years ago, whose fears and joys resemble our own.  They are, in fact, not so different from us.

Here's what I would like to ask readers: How do you identify with characters from the past?

Thank you for letting me share my story with you! 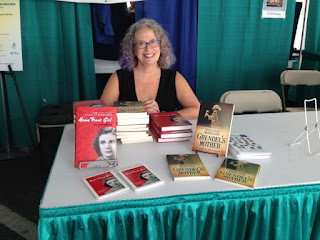 Posted by Margaret @ JustOneMoreChapter at 8:15 AM