Spotlight & Giveaway: On a Desert Shore: A Regency Mystery by S.K. Rizzolo 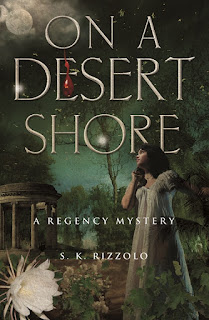 Protecting an heiress should be an easy job for Bow Street Runner John Chase. But the heiress—daughter of rich London merchant Hugo Garrod and a slave-housekeeper on his Jamaican property—is no conventional society miss. Educated to take a place among Regency England’s upper crust and marry well, she has failed at London’s social scene and lives isolated among the Garrod family in Clapham. And someone is playing her malicious tricks, some of which recall her island heritage of Obeah.

John Chase needs to determine whether Marina is indeed a victim—or is herself a delusional and malicious trickster. If the trickster is real, is it her rejected suitor and cousin Ned Honeycutt? His demure sister? Their devoted aunt who acts as the Garrod housekeeper? A clergyman friend? Everyone around Hugo Garrod has a stake in how he disposes of his immense wealth.

Meanwhile Mrs. Penelope Wolfe, an abandoned wife, flouts convention by earning her living with her pen. She’s in love with barrister Edward Buckler and hesitant to further scandalize society by breaking any more rules. Hugo Garrod invites her to join his household and put her pen to work. Her assignment takes her into an exotic world where menace lurks at every turn of the garden path and the façade of propriety masks danger.

To solve the case, Chase must grasp the enigma of Marina, an expert in self-concealment, who challenges his assumptions and confronts him with difficult truths. And, with the aid of Penelope and Edward Buckler, reveal a clever killer.

On a Desert Shore stretches from the brutal colony of Jamaica to the prosperity and apparent peace of suburban London. Here a father’s ambition to transplant a child of mixed blood and create an English dynasty will lead to terrible deeds.

“Bow Street runner John Chase is hired to protect a young heiress from Jamaica, and Mrs. Penelope Wolfe is engaged to live in the woman’s household as an added layer of protection. Together, they must work to uncover a ruthless and diabolical killer. An engrossing fourth historical adventure (after Die I Will Not).” – Library Journal

S.K. Rizzolo earned an MA in literature before becoming a high school English teacher and writer. Her Regency mystery series features a trio of crime-solving friends: a Bow Street Runner, an unconventional lady, and a melancholic barrister. On a Desert Shore is the fourth title in the series following The Rose in the Wheel, Blood for Blood, and Die I Will Not. Rizzolo lives in Los Angeles.

You can also find her on Facebook, Google+, and Goodreads.

Paperback copy of book, open to US and Canada residents
Posted by Margaret @ JustOneMoreChapter at 9:50 AM