Review: The Vatican Princess: A Novel of Lucrezia Borgia by C.W. Gortner 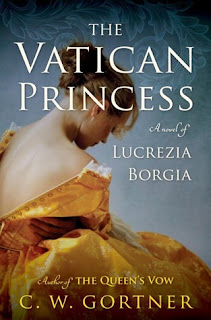 Was she the heartless seductress of legend? Or merely an unsuspecting pawn in a familial web, forced to choose between loyalty and her own survival?

Glamorous and predatory, the Borgias became Italy’s most ruthless and powerful family, electrifying and terrorizing their 15th-century Renaissance world. To this day, Lucrezia Borgia is known as one of history’s most notorious villainesses, accused of incest and luring men to doom with her arsenal of poison.

International bestselling author C.W. Gortner’s new novel delves beyond the myth to depict Lucrezia in her own voice, from her pampered childhood in the palaces of Rome to her ill-fated, scandalous arranged marriages and complex relationship with her adored father and her rival brothers—brutal Juan and enigmatic Cesare.

This is the dramatic, untold story of a papal princess who came of age in an era of savage intrigue and unparalleled splendor, and whose courage led her to overcome the fate imposed on her by her Borgia blood.

C. W. Gortner is a favorite of mine.  He creates stories that breathe life into history, writing with emotion and feeling making the reader (me) connect with his characters.  Some of his previous novels evolve around famous and unique women, Catherine Medici, Queen Isabella and her daughter Juana. It wasn't hard to get lost in these stories and some stayed with me long after I turned the final page.  I will admit after The Last Queen to developing a distinct dislike for King Ferdinand, that's how powerful his writing is. His books are must reads for me, whether I know the subject matter or not.

The Vatican Princess is about Lucrezia, daughter of the Pope.  Knowing very little about this family, other than the reputation of depravity and violence I was anxious to read this one.  Beginning with Lucrezia is young the reader gets to watch as she matures and grows up.  Told from her point of view it wasn't hard to really get to know her and the lifestyle of that time period.  It was interesting to watch the progression of this powerful family and feel the struggles when the tides turn.

Thought it took me a little bit of time to get sucked into this once, but when it did happen I couldn't put it down.  I cared about Lucrezia and felt the injustice, confusion and helplessness that she faced, especially when it came from family, I don't think the Borgia's got the memo about family watching each others back or if they did it was grossly misinterpreted.  The descriptive writing had me visualizing so much and made me appreciate the amount of research the author did to writing this captivating story.

Definitely one I highly recommend, thank you to the publisher via netgalley for the opportunity to review this one

Posted by Margaret @ JustOneMoreChapter at 9:58 AM