Review: At the Edge of the Orchard by Tracy Chevalier 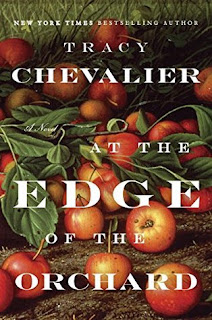 From internationally bestselling author Tracy Chevalier, a riveting drama of a pioneer family on the American frontier

1838: James and Sadie Goodenough have settled where their wagon got stuck – in the muddy, stagnant swamps of northwest Ohio. They and their five children work relentlessly to tame their patch of land, buying saplings from a local tree man known as John Appleseed so they can cultivate the fifty apple trees required to stake their claim on the property. But the orchard they plant sows the seeds of a long battle. James loves the apples, reminders of an easier life back in Connecticut; while Sadie prefers the applejack they make, an alcoholic refuge from brutal frontier life.

1853: Their youngest child Robert is wandering through Gold Rush California. Restless and haunted by the broken family he left behind, he has made his way alone across the country. In the redwood and giant sequoia groves he finds some solace, collecting seeds for a naturalist who sells plants from the new world to the gardeners of England. But you can run only so far, even in America, and when Robert’s past makes an unexpected appearance he must decide whether to strike out again or stake his own claim to a home at last.

Chevalier tells a fierce, beautifully crafted story in At the Edge of the Orchard, her most graceful and richly imagined work yet.

At the Edge of the Orchard is a book about trees, sound exciting?  It's about one man's obsession with apple trees and how another's livelihood shapes who he becomes.

All James Goodenough wanted was to work the land and a provide a home for his family, they traveled a long distance and just needed 50 producing apples trees.  It doesn't sound like much, but when the land was unyielding and a wife unsupportive it was not an easy life for James.  Wife Sadie was an interesting character, as much as she was abusive, unhelpful and just downright nasty the writer made me feel sorry for her.

With one horrific incident the story jumps ahead 15 years to their son Robert, who was only 8 when this incident occurred.  He is clear across the country now as his story slowly unfolds.

I really enjoyed reading this book.  The first part I found rather intense and heartbreaking, the struggles this family endured and how they dealt with each other was sad.  The story slowed down in intensity for the last half but still kept my interest as I wanted to know what had happened.

There are real historical figures in this book, Johnny Appleseed, William Lobb, Billie Lapham and even the fiesty Dody Bienenstock, most that I was unfamiliar with but interesting enough.  There was also the giant trees of the west coast, which are a sight to see.  I loved the authors notes which finished this book off nicely.  Big thanks to the publisher for granting me a copy for review purposed (via netgalley).

Other books I have reviewed by Tracy Chevalier

Posted by Margaret @ JustOneMoreChapter at 12:33 PM