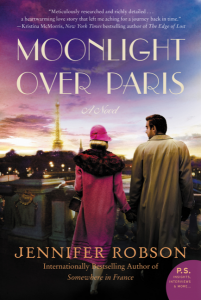 An aristocratic young woman leaves the sheltered world of London to find adventure, passion, and independence in 1920s Paris in this mesmerizing story from the USA Today and internationally bestselling author of Somewhere in France and After the War is Over.

Spring, 1924 Recovering from a broken wartime engagement and a serious illness that left her near death, Lady Helena Montagu-Douglas-Parr vows that for once she will live life on her own terms. Breaking free from the stifling social constraints of the aristocratic society in which she was raised, she travels to France to stay with her free spirited aunt. For one year, she will simply be Miss Parr. She will explore the picturesque streets of Paris, meet people who know nothing of her past—and pursue her dream of becoming an artist. A few years after the Great War’s end, the City of Light is a bohemian paradise teeming with actors, painters, writers, and a lively coterie of American expatriates who welcome Helena into their romantic and exciting circle. Among them is Sam Howard, an irascible and infuriatingly honest correspondent for the Chicago Tribune. Dangerously attractive and deeply scarred by the horror and carnage of the war, Sam is unlike any man she has ever encountered. He calls her Ellie, sees her as no one has before, and offers her a glimpse of a future that is both irresistible and impossible. As Paris rises phoenix-like from the ashes of the Great War, so too does Helena. Though she’s shed her old self, she’s still uncertain of what she will become and where she belongs. But is she strong enough to completely let go of the past and follow her heart, no matter where it leads her?

Artfully capturing the Lost Generation and their enchanting city, Moonlight Over Paris is the spellbinding story of one young woman’s journey to find herself, and claim the life—and love—she truly wants.

I have enjoyed both of Jennifer Robson's previous books, After the War is Over and Somewhere in France.  Though some of the same characters are connected in all 3 books each of them definitely works fine on their own.  But if you haven't read them, I highly recommend.

The synopsis above does a great job of describing what this book is about and in a way I lack words to add to that.  I liked Helena, she was determined to have a life for herself after all that she has gone through in the past few years.  I liked her drive, seeing her emerge out of a mold that her parents had her in to strive for something better and most importantly to do something she wanted to do for herself.  She took risks at the same time as staying true to herself.

The war has been over for a number of years and Paris is in full swing again. The authors writing style is one I like, she knows the time period here, between the social classes in England to life in Paris I was captivated.  I loved the guess appearances of famous individuals in Paris and Helena rubbing shoulders with them.

Fans of Downton Abbey and those who like the roaring 20's should give Robson's books a try.

I had the pleasure of meeting the author last fall, it was wonderful to listen to her talk about getting her books published and to learn more about her, it was a privilege. Jennifer Robson is the USA Today and #1 Toronto Globe & Mail bestselling author of Somewhere in France. She holds a doctorate in British economic and social history from Saint Antony’s College, University of Oxford, where she was a Commonwealth Scholar and an SSHRC Doctoral Fellow. She lives in Toronto, Canada, with her husband and young children.


Thank you to TLC Tours for allowing me to be part of this tour, check out more stops on this tour.