I am happy to have author Cynthia Ripley Miller here today with a special post.  I would love to hear your thoughts about it.  Be sure to scroll to the bottom for more stops on her blog tour to hear about her new book, On the Edge of Sunrise.  There are reviews and giveaways also.

What Does The 5th Century Roman Empire Look Like?
By Cynthia Ripley Miller 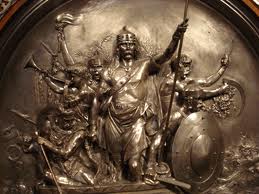 Merovech Victorious in Battle, by Emmanuel Frémiet
(The artist is dead and the piece was done in 1867)

An avid reader of both fiction and history, I became fascinated with fifth century France and the world of the barbarian Franks, later called the Merovingians.  My curiosity doubled when I discovered a different view of ancient Rome in this period and its interaction with European barbarian tribes.  The Roman Empire was on the brink of collapse and into this gap stepped the barbarians.  Gregory of Tours, bishop, and sixth century historian, wrote in his work, The History of the Franks, of how the Franks rose from tribal chiefs and warriors to the acknowledged masters of Roman Gaul (France).  Fascinated by this era of change and upheaval, I chose late ancient Rome and Gaul as the setting for my novel, On the Edge of Sunrise.
History and People
By the third century, the Germanic Franks were a federation formed of eleven tribal groups, which included the Salian Franks and the Chamavi.  They occupied the territory on the east bank of the lower Rhine valley known as Gaul (modern Belgium and southern Netherlands) and in the later centuries as Francia/France.
Merovingian, the title given to the Franks, derives from Meroveus/Merovech one of the first kings of the Salian Franks.  Around 450, he entered a power struggle with his older brother for the throne.  Meroveus went to Rome to gain support from the Romans for succession as king against an elder brother who aligned with Attila the Hun for the same reason.  Priscus, a Roman historian, wrote of Meroveus, “ … he was still very young and we all remarked his fair hair which fell upon his shoulders.”  Frank nobles distinguished themselves from the commoner and other groups by wearing longer hair, despite the fashion, and were called ‘Long-hairs.’  The Salian Franks fought with Rome at the Battle of Catalaunum or Catalaunian Plains.
General Flavius Aetius, also referred to by some as the ‘last Roman’, served as the Master of the Soldiers from 429 to 454 and had a long career as a soldier and general.  He won the Battle of Catalaunum against Attila the Hun in 451.  After Attila’s death in 453, Emperor Valentinian III believed that Aetius conspired to put his own son, Gaudentius (betrothed to Valentinian’s daughter) on the throne.  Valentinian felt threatened and stabbed Aetius to death as he read a financial account to him.  With Aetius gone, the empire was vulnerable and left without a true defender.  In 455, the Vandals sacked Rome.
Religion
By the fifth century, most of the Roman Empire was Christianized, including many barbarian groups.  However, reputable sources have recorded that the Germanic Franks were northern pagans in a Christian Roman Empire.  Little evidence exists regarding their precise spiritual beliefs, especially in the fifth century.  Yet, they were a Germanic tribe.  The Franks remained pagan until Clovis.  He united all the Frank tribes under one ruler to become their first official king and converted to Christianity in 496.
5th Century Products and Domestic Life
The most important role for a Roman woman was as a wife and mother.  Mothers passed on their domestic skills to their daughters, but historians write that girls and boys attended primary school. Girls from elite families learned Latin and Greek. Girls and boys sang in choirs and attended social events.  Women from the upper classes appear ‘well-educated, some highly so, and at times praised by historians for their learning and cultivation.’  Freeborn women were citizens but could not vote or hold office; however, women played an active role in trying to persuade the government to adopt certain policies.  Although Roman women held no direct political power, those from wealthy or powerful families could and did influence through private negotiations.
The currency at the time was the Denarius and Solidus.
Braziers (a portable heater) were stoked by wood, charcoal and coke; oil lamps for light and heat.  Rural farms used center room fire pits.
Barbarian men wore tunics with leggings and the women tunic style dresses. Brooches were used to secure capes and robes together. Roman men wore uniforms if in the military and on duty, otherwise tunics without leggings.  Togas were more for dress or ceremony.  Roman women wore the stola, a draped, belted dress.
Barbarians liked mead.  Romans liked watered down or sweetened wine.  However, no one will pass up what is available to them!
The fifth century is an era rich in drama and ripe for storytelling.  I sought to bring my heroes, Arria and Garic, to life in an age not only changing in cultural perspectives, but also, one struggling to be born.
Attila the Hun, another historical figure in my story, adopted the Roman custom of bathing.  Even into the sixth century Roman baths were not only for hygiene and gymnastics, but for conversation and ??
What is a public room housed in the baths one might not expect to find?  Do you have any 5th century facts you can share?
Quoted Sources:  Gregory of Tours, The History of the Franks; Beryl Rawson, The Family in Ancient Rome: New Perspectives; Bertrand Lançon: Rome in Late Antiquity

The Roman Empire wanes as the Medieval Age awakens. Attila the Hun and his horde conquer their way across Europe into Gaul. Caught between Rome’s tottering empire and Attila’s threat are the Frankish tribes and their ‘Long-Hair’ chiefs, northern pagans in a Roman Christian world, and a people history will call the Merovingians. 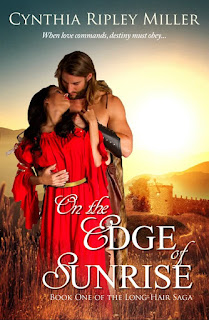 A young widow, Arria longs for a purpose and a challenge. She is as well versed in politics and diplomacy as any man … but with special skills of her own.

The Emperor Valentinian, determined to gain allies to help stop the Huns, sends a remarkable envoy, a woman, to the Assembly of Warriors in Gaul. Arria will persuade the Franks to stand with Rome against Attila.

When barbarian raiders abduct Arria, the Frank blue-eyed warrior, Garic, rescues her. Alarmed by the instant and passionate attraction she feels, Arria is torn between duty and desire. Her arranged betrothal to the ambitious tribune, Drusus, her secret enlistment by Valentinian as a courier to Attila the Hun, and a mysterious riddle—threaten their love and propel them into adventure, intrigue, and Attila’s camp. Rebels in a falling empire, Arria and Garic must find the strength to defy tradition and possess the love prophesied as their destiny.

Praise
“From cover to cover a gripping read – in all senses of the word! Grips your interest and imagination, your held breath and your pounding heart! A thumping good novel!” – Helen Hollick, USA Today bestselling author & Managing Editor Historical Novel Society Indie Reviews

“AD 450. The Roman Empire is breaking apart, and Attila the Hun has his sights set on conquering Gaul. … The love story between Garic and Arria is set against a background of fierce battles, intrigue, jealousy and betrayal. … The story weaves, twists and turns at a tremendous pace, and the characters leap off the pages, which simply keep on turning. This is the author’s debut novel, the first in her ‘Long Hair’ series. I look forward to reading more in due course. Recommended. – Marilyn Sherlock, Historical Novel Society, HNR Issue 74 (November 2015)

“On the Edge of Sunrise is a compelling epic, sure to appeal to fans of historical fiction. Forbidden love, a turbulent time period, and world-changing events combine to produce a real page-turner.” – India Edghill, author of Queenmaker, Wisdom’s Daughter, and Delilah

“On the Edge of Sunrise is a passionate and intriguing take on the often overlooked clash of three brutal and powerful empires: the Romans, Franks, and Huns. A Compelling read!” – Stephanie Thornton, author of The Secret History and The Tiger Queens 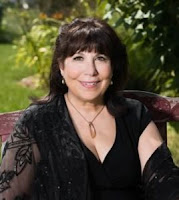 Cynthia Ripley Miller is the author of On the Edge of Sunrise, the first novel in the Long-Hair Sagas, a series set in Late Ancient Rome and France. She has lived and travelled in Europe, Africa, North America and the Caribbean, taught history and currently teaches English. Her short stories have appeared in the anthology Summer Tapestry, The Scriptor, and at Orchard Press Mysteries.com. Cynthia writes a blog, Historical Happenings and Oddities: A Distant Focus. She lives with her husband, twin cats, and German Shepherd in a suburb of Chicago.

click on banner for more stops on this tour
Posted by Margaret @ JustOneMoreChapter at 4:31 PM