Review: Along the Infinite Sea (Schuyler Sisters #3) by Beatriz Williams 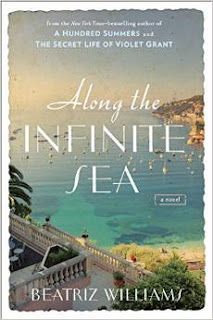 Each of the three Schuyler sisters has her own world-class problems, but in the autumn of 1966, Pepper Schuyler's problems are in a class of their own. When Pepper fixes up a beautiful and rare vintage Mercedes and sells it at auction, she thinks she's finally found a way to take care of herself and the baby she carries, the result of an affair with a married, legendary politician.

But the car's new owner turns out to have secrets of her own, and as the glamorous and mysterious Annabelle Dommerich takes pregnant Pepper under her wing, the startling provenance of this car comes to light: a Nazi husband, a Jewish lover, a flight from Europe, and a love so profound it transcends decades. As the many threads of Annabelle's life from World War II stretch out to entangle Pepper in 1960s America, and the father of her unborn baby tracks her down to a remote town in coastal Georgia, the two women must come together to face down the shadows of their complicated pasts.

Indomitable heroines, a dazzling world of secrets, champagne at the Paris Ritz, and a sweeping love story for the ages, in New York Times bestselling author Beatriz William's final book about the Schuyler sisters.


Hardcover, 464 pages
Published November 3rd 2015 by G.P. Putnam's Sons
arc via netgalley
****
I became a fan of Beatriz Williams after listening to the audio of The Secret Life of Violet Grant (which I loved).  Along with Tiny Little Things and this book they form a series about the Schuyler Sisters.  Though involving 3 sisters it is not necessary to read in an particular order - they are wonderful on their own, but if you are like me I am sure you'll be reading them all.

Along the Infinite Sea is a dual time period story of 2 young women and the car that connects them.  In 1966 Pepper is young, single, pregnant and on the run. She has gotten herself into a sticky situation and to her the only solution is to run, leaving family behind.   Back in the 1930's we have Annabelle, though young and naive she is forced to do some serious growing up.  Things are tense in Europe during the 1930's and no one is immune to what is about to take place.

I found this book entertaining, Pepper's sassy character with her witty comments and carefree attitude  helps to off set the drama and tension taking place in Europe.  Annabelle's story is more intense and the driving force of this book.  There was plenty to keep ones attention and I can admit the ending wasn't one I envisioned, it worked and I liked it.

The authors writing style is such that had me hooked from the beginning, it wasn't hard to get lost in this story.  One of the things I liked was the timing, it isn't often that I read of the years preceding the war, which is what happened with this book and I found that to be a refreshing change.

I started this book with high expectations and I was not disappointed.  Thanks to the publisher (via netgalley) for providing a copy for review purposes.

Posted by Margaret @ JustOneMoreChapter at 10:10 PM