Please join Mary F. Burns as she tours the blogospere with HF Virtual Book Tours for Isaac and Ishmael: A Novel of Genesis from June 8-26. 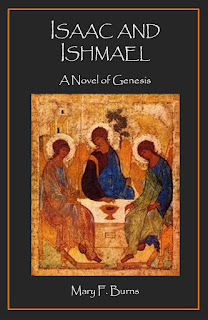 Isaac and Ishmael attempts to bring to human scale the legends and mythic dimensions of Abraham and Sarah, their sons Isaac and Ishmael, and Isaac and Rebecca’s twin sons Esau and Jacob. Readers will experience the struggles, competition, betrayals and loves of these brothers, fathers and sons caught up in the overarching tension between time and eternity, a place where a new God is coming into being—Yahweh, the uncanny, irascible, mischievous, bargaining God who participated in the life of a new people and compelled them to a new way of being human.

The stormy relationship of Isaac and Ishmael has long passed into a tradition which looks to Isaac as the father of the Jewish people, and Ishmael as the father of the Arab people, particularly in Egypt. Similarly, while Jacob carries on his father’s heritage, becoming the father of the Twelve Tribes of Israel, his twin brother Esau, the red-haired archer who sold his birthright for a bowl of lentil soup, is traditionally said to have departed for the North, and populated what would later become Rome. Isaac and Ishmael explores the thorny, complex yet delicate relations between these brothers and fathers, providing a more human understanding of the differences that arise between individuals and peoples, even now as the ancient tensions in the Middle East continue to flare up in modern confrontations and war. Ever present in the story are the strong, subtle and often ambitious women of Biblical legend: Sarah, Rebecca, Rachel and Leah.

Found in Translation: Writing Biblical Fiction, or it’s all Greek—or Hebrew—to Me

Writing biblical fiction poses an enormous initial challenge: what translation do you use as a basis for the story you will write? Not knowing Hebrew (ancient or otherwise) and having only the most basic elements of Greek (enough to look something up in a Greek-English lexicon), I found myself with a stack of bibles and a multitude of styles, approaches, agendas and theological/political preferences to choose from.

Often the actual ‘facts’ of the story lines are the same, but the choice of words—the diction—that different translators use can provide a continuum of descriptors of the characters themselves. In a novel, which is a fictionalized account of the timeless, ancient stories and human truths that we find in religious texts, who the “characters” are will be revealed by not only their actions but the words they use—words the writer has to choose to make those characters come to life.

And that’s another challenge of writing biblical fiction—most of us find those stories all too familiar, not only from our own reading or church or synagogue attendance, but also from movies and history books, too—so how we writers bring those almost-stereotyped people to true life is a daunting and yet, interesting task.

Here are a couple of sentences from a variety of translations, old and new, as an example of what I’m talking about. I chose this “scene” as the opening for my book, Isaac and Ishmael—it’s the part when the three visitors from God visit Abraham and tell him he and Sarah will have a son. (Genesis 18:11-12)

King James Bible:  Now Abraham and Sarah were old and well stricken in age; and it ceased to be with Sarah after the manner of women. Therefore Sarah laughed within herself, saying, After I am waxed old shall I have pleasure, my lord being old also?

The Jerusalem Bible:  Now Abraham and Sarah were old, well on in years, and Sarah had ceased to have her monthly periods. So Sarah laughed to herself, thinking, “now that I am past the age of child-bearing, and my husband is an old man, is pleasure to come my way again?”


The Five Books of Moses (trans. Everett Fox):  And Avraham and Sara were old, advanced in days, the way of women had ceased for Sara. Sara laughed within herself, saying: After I have become worn, is there to be pleasure for me? And my lord is old!

The ArtScroll Tanach Series (w/rabbinical commentary): Now Abraham and Sarah were old, well on in years; the manner of women had ceased to be with Sarah – And Sarah laughed at herself, saying, ‘After I have withered shall I again have delicate skin? And my husband is old!’

The Book of J (Harold Bloom & David Rosenberg, trans.):  But Sarai and Abram were old, many days were behind them; for Sarai the periods of women ceased to exist. So within her Sarai’s sides split: “Now that I’m used to groaning, I’m to groan with pleasure? My lord is also shriveled.”

All of those versions pretty much tell the same story, right? But there are subtle differences, from the demure “after the manner of women” to the wry joking with the word “groan”. Sarah laughs “to” and “within” and also “at” herself—which, if you think about those choices, can reveal interesting psychological states. The presence of laughter is very significant, as we find out later when they name their son “Isaac” which means, “He laughs” – because he comes out of the womb laughing! This was a very special element of Isaac’s character which I was able to draw upon throughout the novel in many interesting ways.

For this novel, as well as a previous novel (J—The Woman Who Wrote the Bible), I am happy to admit that I was very influenced by the translation in The Book of J, as well as very enlightened by the irascible, contradictory and often amusing rabbinical commentary contained in the ArtScroll Tanach Book of Genesis. David Rosenberg (for The Book of J) is a poet who knows Hebrew, and his earthy, concrete, stripped-down rendition of those oh-so-familiar passages were a delight and a revelation to read and ponder.

That said, here is how that initial scene opens my story of Isaac and Ishmael:

Sarai, laughing, has hurt Yahweh’s feelings.
What? I who groan in age am now to groan in pleasure, and bear a son? Who’s kidding whom?
Who is that laughing? says Yahweh. Who thinks I cannot do this thing?
Not I. Her eyes on the ground. Then sideways she sees her husband whose eyes are fixed on the boldest stranger, who sits eating veal and drinking milk under their olive trees. Abram holds his breath. The stranger has just said to him, Count the stars. Can you? Your descendants shall be more. The two men with him are silent, their eyes glitter, their arms like wings tucked at their sides even as they eat.
I’ll be back in nine months, says the stranger, to see your son.

Watch: they wrestle in the tent on the warm skins of calves. Under woven cloth, worn hands caress dry flesh, thin lips press to cheeks once smooth, once firm, still loved.
A deep well of laughter shakes her, a joy not to be named. Her foolish husband thinks this is how it must be done. She felt the dart of light hit her womb when the stranger spoke.

How important to you are the words that an author uses?  Is it merely the story that holds your interest? Are you captivated by a turn of phrase? Are you put off by “fifty-cent” words that seem like the author just clicked on the Thesaurus link to find a substitute for something more common?  I’d love to hear what readers think about words! 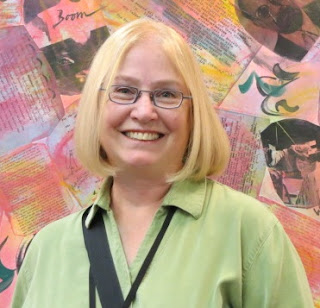 Mary F. Burns is the author of ISAAC AND ISHMAEL, published by Sand Hill Review Press in November 2014. Other historical fiction includes THE SPOILS OF AVALON and PORTRAITS OF AN ARTIST (Sand Hill Review Press, February 2014, 2013), both books featuring the celebrated portrait painter, John Singer Sargent and his best friend, writer Violet Paget (aka Vernon Lee). Mary is a member of and book reviewer for the Historical Novel Society and a former member of the HNS Conference board of directors. Her debut historical novel J-THE WOMAN WHO WROTE THE BIBLE was published in July 2010 by O-Books (John Hunt Publishers, UK). She has also written two cozy-village mysteries in a series titled The West Portal Mysteries (The Lucky Dog Lottery and The Tarot Card Murders). She will be part of two panels at the upcoming North American Historical Novel Society Conference in June in Denver, one on The Historical Mystery and the other on Art and Artists in Historical Fiction.

Ms. Burns was born in Chicago, Illinois and attended Northern Illinois University in DeKalb, where she earned both Bachelors and Masters degrees in English, along with a high school teaching certificate. She relocated to San Francisco in 1976 where she now lives with her husband Stuart in the West Portal neighborhood.

Ms. Burns may be contacted by email at maryfburns@att.net. For more information please visit Mary Burns’s website at www.maryfburns.com. You can also connect with Mary on Facebook, Twitter, and Goodreads, or read her blog posts at: