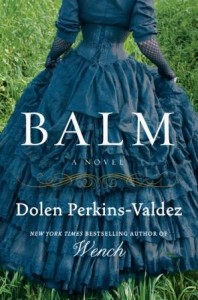 The New York Times bestselling author of Wench—called "a fascinating and tragic story" by NPR.org, "deeply moving" by USA Today, and "lyrical and devastatingly beautiful" by People magazine—returns to the Civil War era to explore history's next chapter in this powerful story of love and healing.

The Civil War has ended, and Madge, Sadie, and Hemp have each come to Chicago in search of a new life.
Born with magical hands, Madge has the power to discern others' suffering and ease it, but she cannot heal her own damaged heart. To mend herself and continue to help those in need, she must return to Tennessee to face the women healers who rejected her as a child.

Sadie can commune with the dead, but until she makes peace with her father, she, too, cannot fully engage her gift.

Searching for his missing family, Hemp arrives in this northern city that shimmers with possibility. But redemption cannot be possible until he is reunited with those taken from him.
In the bitter aftermath of a terrible, bloody war, as a divided nation tries to come together once again, Madge, Sadie, and Hemp will be caught up in an unexpected battle for survival in a community desperate to lay the pain of the past to rest.

Beautiful in its historical atmosphere and emotional depth, Balm is a stirring novel of love, loss, hope, and reconciliation set during one of the most critical periods in American history.

Dolen Perkins-Valdez is a new author to me, her first book Wench is patiently waiting on my kindle, so it was with much anticipation that I began this book.  As you can read from the synopsis above there is a lot going on here.

Any war changes people, not just outwardly but internally as well.  Such is the case here, add a little bit of supernatural and you have the setting for Balm.  With three vastly different characters and situations this was a story that kept my attention and I found quite fascinating.

First introduced to the young widow Sadie and her arrival in a strange and foreign place expecting to be meet by her husband.  Well she was, but alas he had died.   Hers is a story of betrayal, family loyalty and searching for a place to belong.  I liked her, the author created a woman with an usually gift (if you want to call it that) and she used it trying to help others.

Madge was an interesting character and had the gift of healing, the one needing the most healing was herself.  She was strong and caring of others in a time after the Civil War ended that was a time of healing for most people, both physically and mental.

Hemp just wants his family back, arriving in Chicago he is met with a much larger city then anticipated and begins his search.  I think his story was the one that spoke the most to me.  Being slaves and not in control on ones life but at the mercy of others would have been the most difficult thing to deal with, then to be separated with not an ounce of compassion is just unfathomable.  You can feel his determination.

I liked the authors writing style, this book flowed nicely, I was able to visualize and feel the setting and emotions taking place.  How the lives of these 3 individuals intertwined was creative and excuted nicely.  There is much going on in Balm, it's a story of hope, forgiveness and the strength to carry on in the aftermath of one of the US's brutal periods in history.

Definitely a must read for fans of HF taking place in USA.

Dolen Perkins-Valdez is the author of the New York Times bestselling novel Wench. Her fiction has appeared in the Kenyon Review, StoryQuarterly, StorySouth, and elsewhere. In 2011 she was a finalist for two NAACP Image Awards and the Hurston-Wright Legacy Award for fiction. She was also awarded the First Novelist Award by the Black Caucus of the American Library Association. She teaches in the Stonecoast MFA program in Maine. A graduate of Harvard and a former University of California President's Postdoctoral Fellow at UCLA, Dolen Perkins-Valdez lives in Washington, D.C., with her family.

Posted by Margaret @ JustOneMoreChapter at 8:32 AM