Blood Between Queens by Barbara Kyle 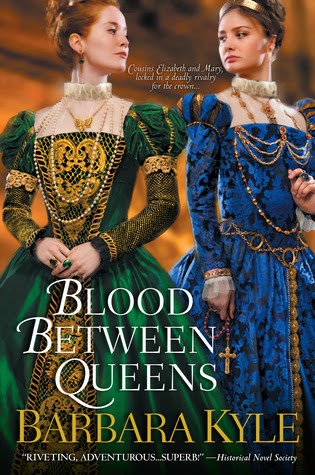 Following her perilous fall from a throne she’d scarcely owned to begin with, Mary, Queen of Scots, has fled to England, hoping her cousin, Queen Elizabeth, will grant her asylum. But now Mary has her sights on the English crown, and Elizabeth enlists her most trusted subjects to protect it.

Justine Thornleigh is delighting in the thrill of Queen Elizabeth’s visit to her family’s estate when the festivities are cut short by Mary’s arrival. To Justine’s surprise, the Thornleighs appoint her to serve as a spy in Mary’s court. But bearing the guise of a lady-in-waiting is not Justine’s only secret. The weight of her task is doubled by fears of revealing to her fiancé that she is in truth the daughter of his family’s greatest rival. Duty-bound, Justine must sacrifice love as she navigates a deadly labyrinth of betrayal that could lead to the end of Elizabeth’s fledgling reign…


Paperback, 400 pages
Published April 30th 2013 by Kensington
arc - netgalley
*****
I was somewhat late boarding the Thornleigh wagon, but as they say better late then never.  Reading this series has made Barbara Kyle a favorite of mine.

Though the Thornleigh's are fictional characters the events taking place are drawn from history.  Queen Elizabeth is on the throne and is dealing with her cousin Mary, Queen of Scots.

The is the 5th book in the series, it does work as a stand along, but I highly recommend starting at the beginning with The Queens Lady.  The first 4 books I listened to the audio version, which was read by the author herself.  For Blood Between Queens I decided to read the book, it was funny because I still could hear the authors voice in my head.

It didn't take me long to read this one, I was drawn into the story right away.  I liked Justine  (who is the adopted daughter of Richard and Honor Thornleigh)  right from the start.  Because of her past there was the makings of a great story which this was.  Sent to befriend Mary on orders from Queen Elizabeth Justine encounters ghosts from her past that causes her to struggle with who she really is.  There is depth to her character as she makes decisions that affected those around her.  The events which took place in previous books are explained here making sure the reader got the whole picture of the history between the Grenvilles and the Thornleighs as well as the repercussions which take place here.

Filled with mystery, romance, loyalty, forgiveness and suspense this latest installment I think might just be my favorite.  This story flowed smoothly right to the highly emotional ending.  Each book in this series is roughly 400 pages long, so there is time to get to know the characters and the history of Tudor England.  If you haven't started this series don't be shy, especially if you are a fan of this time period, you won't be disappointed.