The Queen's Lady by Barbara Kyle 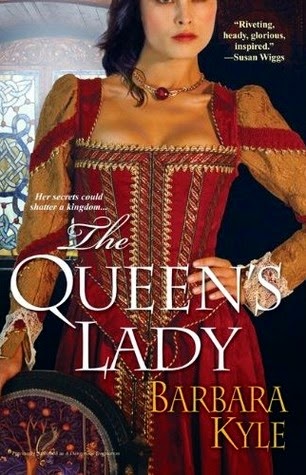 Abducted as a child-heiress, Honor Larke escapes to London seeking justice from the only lawyer she knows: the brilliant Sir Thomas More. With More as her affectionate guardian, Honor grows to womanhood, when the glitter of the royal court lures her to attend Her Majesty, Queen Catherine of Aragon. But life at Henry VIII’s court holds more than artifice for an intelligent observer, and Honor knows how to watch—and when to act. . . .

Angered by the humiliation heaped upon her mistress as Henry cavorts with Anne Boleyn and presses Rome for a divorce, Honor volunteers to carry letters to the Queen’s allies. It’s a risky game, but Honor is sure she’s playing it well—until she’s proved wrong. Richard Thornleigh may cut a dashing figure at court, but Honor isn’t taken in by his reckless charm. Only later does Honor realize that Richard has awakened something within her—and that he, too, has something to hide. . .

For the King’s actions are merely one knot in a twisted web that stretches across Europe, ensnaring everyone from the lowliest of peasants to the most powerful of nobles. Swept away in a tide of intrigue and danger, the Queen’s lady is about to learn everything: about pride, passion, greed—and the conscience of the King. . . .

and *sigh* as I type this review hanging my head, I can't believe that it has taken so long


Posted by Margaret @ JustOneMoreChapter at 11:05 PM