Waiting on Wednesday: Lady of the Eternal City by Kate Quinn 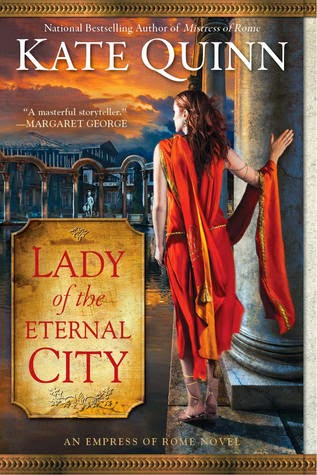 Paperback, 512 pages
Expected publication: March 3rd 2015 by Berkley Trade
Kate Quinn is a favorite of mine can't wait for this one!

National bestselling author Kate Quinn returns with the long-awaited fourth volume in the Empress of Rome series, an unforgettable new tale of the politics, power, and passion that defined ancient Rome.

Elegant, secretive Sabina may be Empress of Rome, but she still stands poised on a knife’s edge. She must keep the peace between two deadly enemies: her husband Hadrian, Rome’s brilliant and sinister Emperor; and battered warrior Vix, who is her first love. But Sabina is guardian of a deadly secret: Vix’s beautiful son Antinous has become the Emperor’s latest obsession.

Empress and Emperor, father and son will spin in a deadly dance of passion, betrayal, conspiracy, and war. As tragedy sends Hadrian spiraling into madness, Vix and Sabina form a last desperate pact to save the Empire. But ultimately, the fate of Rome lies with an untried girl, a spirited redhead who may just be the next Lady of the Eternal City . . .