Why Delphi and Ancient Greece? by Marie Savage (book tour)

I am happy to have author Marie Savage (Oracles of Delphi) join me today for a little guest post. 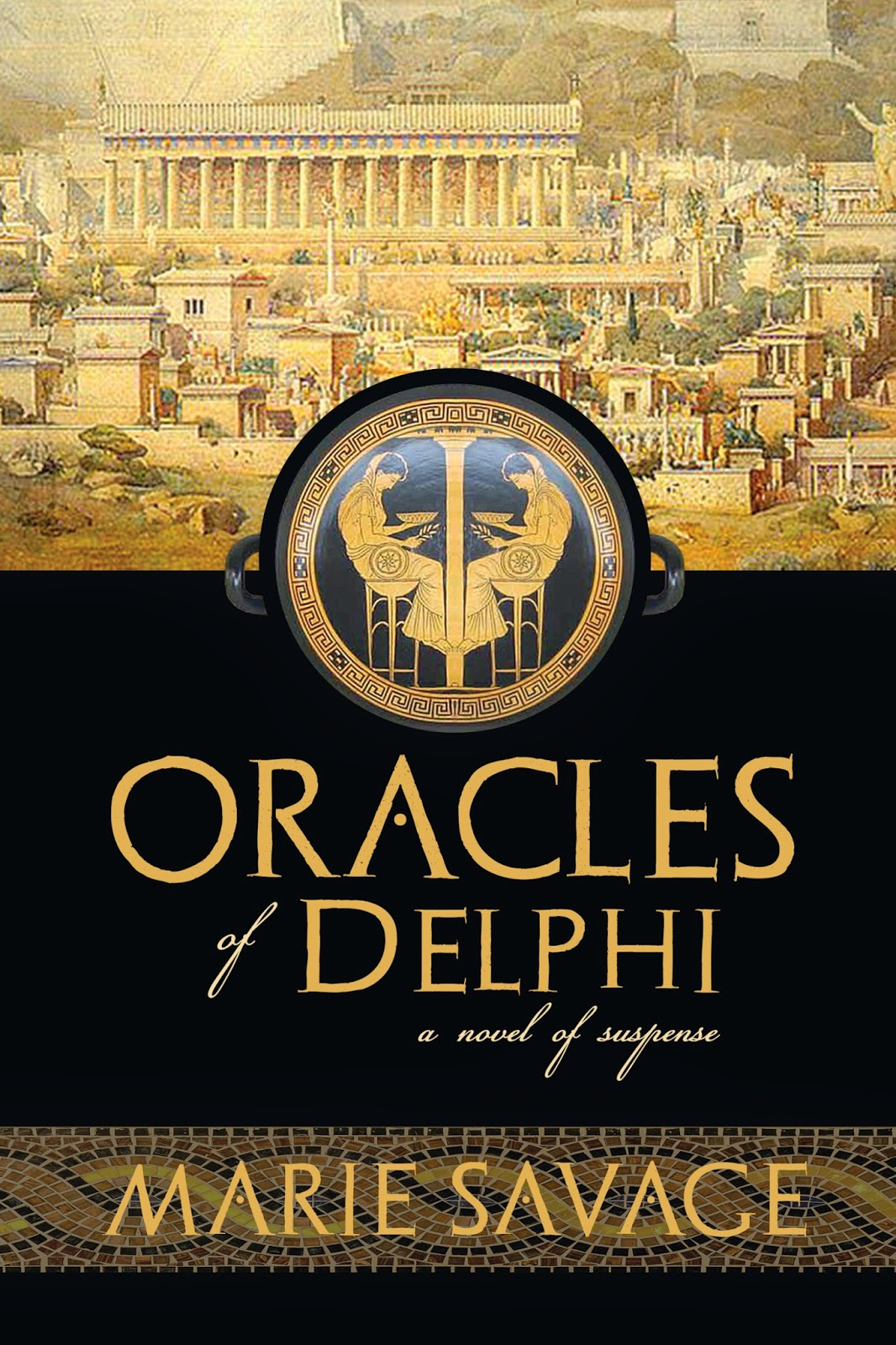 Why Delphi and Ancient Greece?

When I’m asked why I chose Ancient Greece as the setting for a novel and why I chose to weave both romance and mystery into the book, I often answer with a question of my own: “Have you ever been to Delphi?”

I’ve been lucky enough to visit Delphi on numerous occasions, but it only took one trip for me to become completely captivated by the beauty of the place. Once I’d seen it, once I’d breathed it in and walked up the Sacred Way, I was hooked. I could no more stop my imagination from conjuring up stories of the Pythia, the priests, and the sacred oracle than I could stop breathing. And considering wherever there are people, there will be romance and wherever there is religion and politics mixing together there will be mystery and intrigue, I knew the book would have to have all these elements.

ORACLES OF DELPHI is set in 340 BCE, a time of great change. The glory of Athens and Sparta had faded—even though Athenians and Spartans at the time would hardly have admitted it—and the conquests of Philip of Macedon and his son Alexander loomed large. Socially, it was a time of great upheaval in science and philosophy as new ideas grounded in the human capacity for rational thinking and apprehending the world through the senses rather than reliance on the gods for understanding were gaining adherents. And, given that there were no major wars going on, it was a time of relative peace and so Althaia and her friends could travel easily.

As a woman and the mother of two daughters, I wanted to write a female character firmly rooted in her time and the restrictions she would have to face, but who also showed great spirit and curiosity about the world. Althaia of Athens must live within the constraints of her position—she is married off to a cousin to keep her father’s wealth in the family—and her movement and participation in society is limited. However, she is educated and headstrong and relies on two unconventional men who give her a tremendous amount of leeway to study and travel. Theron, her tutor, and Praxis, her slave, play different roles in her life and I hoped, through their relationships, to show both Althaia’s vulnerability and her determination. With the introduction of Nikos, her love interest, I wanted to explore how Althaia might view the competing interests of honoring her husband and giving into love and desire.

In setting up the conflict between the priests of Apollon and the priestesses of Gaia, I took great liberties with myth and history—it is historical fiction, after all. I’ve always been fascinated with the history of religion and have read a great deal about the early foundations of what we know today as mere myths. Some scholars have speculated about a time period in which female “mother earth” goddess cults rooted in fertility and nature motifs were gradually replaced by male sky and warrior gods who laid down the law and ruled with the fearsome power of thunder and lightning. Delphi, to me, seemed like the perfect place to illustrate this transition as the foundational myth says that the site was originally sacred to Gaia who was the mother of all, including the Titans and, hence, great grandmother of Apollon who was the son of Zeus and grandson of Kronos, one of the Titans. Gaia’s oracle at Delphi was guarded by a serpent which was associated with the Korycian Cave—symbolic of the womb of the earth.  Eventually, Apollon came along and slew the serpent and claimed the oracle as his own. This coin illustrates the myth as the tripod of the Pythia is between Apollon and the serpent: http://www.odysseyadventures.ca/articles/delphi/001.coinCroton.jpg

In ORACLES OF DELPHI, I imagined that the priestesses of Gaia did not give up so easily and that a remnant of worshippers remained in Delphi claiming the oracle as their own. Two competing claims to the power and fame, not to mention wealth, of the oracle seemed to be the perfect set-up for murder.

We know today, however, that even Apollon’s power was eventually supplanted in Delphi and a new god came to be worshipped throughout Greece. Besides the rise of Christianity and the rise of rationalism, Delphi suffered from another problem—it seems the Pythia just couldn’t get high enough to channel the god anymore. Modern scientists speculate that seismological changes—Delphi sits on two fault lines that intersect almost directly under the temple—reduced flow or elimination of the narcotic, trance-inducing gas issuing from the bedrock. The historian Plutarch (c. 46-120 AD), who served as the senior of the two priests of Apollon in Delphi, described the smell of the sacred pneuma as sweet and speculated that the weakening influence of the oracle in his time was caused by the pneuma’s sporadic and weak emissions. (For more on the geology of Delphi, visit http://www.biblicalarchaeology.org/daily/ancient-cultures/daily-life-and-practice/the-oracle-of-delphi%E2%80%94was-she-reallystoned/ or read The Oracle: Ancient Delphi and the Science Behind Its Lost Secrets by William J. Broad.)

Finally, in 393 AD, when Roman emperor Julian the Apostate tried to revive elements of classical Greek culture, he consulted Delphi’s famed oracle and in response, the last Pythia issued this statement:

Tell the King:
The fair wrought house has fallen.
No shelter has Apollon,
nor sacred laurel leaves;
The fountains are now silent;
the voice is stilled.
It is finished.

In the book, in 340 BCE, I imagine the earlier period when Gaia’s priestesses finally give way to Apollon and, after Althaia and her friends solve the murder, the Pythia of Gaia issues her own final statement:

Tell the People
Our Mother Earth has spoken.
Gaia’s oracle is broken.
Apollon’s hundred arrows
Silenced her sacred servant.
Now, in one or one thousand years,
His fair wrought house will fall
And a god reborn shall reign.

I hope readers of mystery, romance, and myth enjoy ORACLES OF DELPHI and thank you for hosting me! 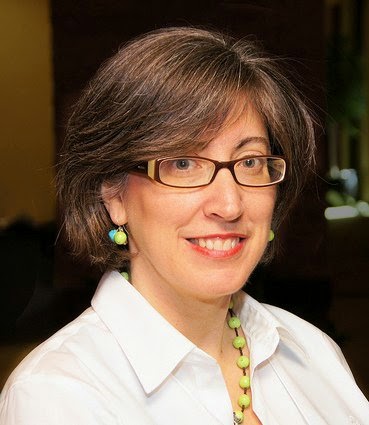 Marie Savage is the pen name of Kristina Marie Blank Makansi who always wanted to be a Savage (her grandmother’s maiden name) rather than a Blank. She is co-founder and publisher of Blank Slate Press, an award-winning small press in St. Louis, and founder of Treehouse Author Services. Books she has published and/or edited have been recognized by the Independent Book Publishers Association (IBPA), the Independent Publisher Book Awards (IPPY), the Beverly Hills Book Awards, the David J. Langum, Sr. Prize in American Historical Fiction, the British Kitchie awards, and others. She serves on the board of the Missouri Center for the Book and the Missouri Writers Guild. Along with her two daughters, she has authored The Sowing and The Reaping (Oct. 2014), the first two books of a young adult, science fiction trilogy. Oracles of Delphi, is her first solo novel.