Curses and Smoke: A Novel of Pompeii by Vicky Alvear Shecter 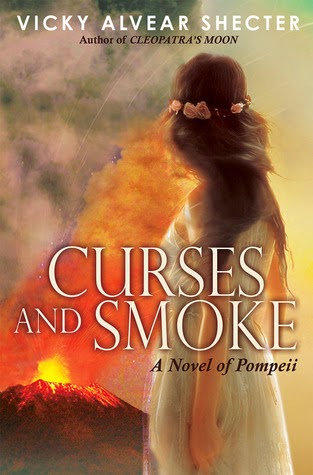 When your world blows apart, what will you hold onto?

TAG is a medical slave, doomed to spend his life healing his master's injured gladiators. But his warrior's heart yearns to fight in the gladiator ring himself and earn enough money to win his freedom.

LUCIA is the daughter of Tag's owner, doomed by her father's greed to marry a much older Roman man. But she loves studying the natural world around her home in Pompeii, and lately she's been noticing some odd occurrences in the landscape: small lakes disappearing; a sulfurous smell in the air. . . .

When the two childhood friends reconnect, each with their own longings, they fall passionately in love. But as they plot their escape from the city, a patrician fighter reveals his own plans for them -- to Lucia's father, who imprisons Tag as punishment. Then an earthquake shakes Pompeii, in the first sign of the chaos to come. Will they be able to find each other again before the volcano destroys their whole world?

Ah Pompeii...the tragic story of a city buried beneath the stone and ashes Vesuvius.

Lucia betrothed to a man old enough to be her grandfather.

Tag, a young medicine man, a slave who just wants his freedom.  Returning to Pompeii after spending 3 years in Rome.

Things arent the same in Pompeii anymore, the earth is doing strange things and Lucia seems to be the only on concerned about it.

This is young adult at its finest.  Filled with romance, drama, mystery, curses and secrets I had a hard time putting this book down.  The author knows her history of Pompeii and it shows in this book.  Lucia and Tag are both likeable characters and there is depth to their stories.  The plot, yea it was really good too.

The author notes are always a favorite part of a good HF read and I was not disappointed.  Explaining her sources and why she wrote what she did.  Definitely a great way to end my reading for 2014.
Posted by Margaret @ JustOneMoreChapter at 12:30 AM