Spotlight: To Get To the Other Side by Kelly Ohlert 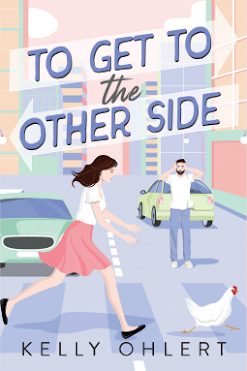 Kindle Edition, 336 pages
Expected publication: December 6, 2022
by Alcove Press
In the vein of Lyssa Kay Adams and Abby Jimenez, Kelly Ohlert’s charming debut is a one-of-a-kind rom-com that explores the power of overcoming the past and fighting for the things you love.

Trixie isn’t exactly sure what she was thinking when she stopped her car in the middle of downtown Chicago, scooped up a chicken struggling to cross the road, and drove off… but she does know that she has to find a new home for herself and her new feathered friend. The landlord at her apartment doesn’t allow pets and has caught Trixie in one too many pet-smuggling attempts in the past.

Bear likes his quiet life with his close-knit family, who own a flower business, but he’s in for a rude awakening when his meddlesome sisters post an ad to rent the spare room in his simple home, without asking his permission. Still, when Trixie responds to the ad, he agrees to let her move in, despite immediate worries about keeping things platonic.

Determined to keep her new room, befriend Bear, and give her rescue chicken the care she deserves, Trixie fights to keep her walls up and resist her romantic feelings for Bear. However, it’s not long before the pair’s proximity and chicken parenting ignite flames that have Trixie and Bear testing the boundaries of their platonic ground rules. They have to figure out how to save a family business, pay for mounting vet bills, and navigate their own emotional baggage if they want to find the love that they all deserve.

Perfect for readers of The Flatshare by Beth O’Leary, and fans of The Friend Zone by Abby Jimenez, readers will find themselves rooting for every one of the relatable, but tenderly flawed, characters in this book as they follow the heartwarming antics of a rescue chicken and her human companions.