A Sinister Revenge by Deanna Raybourn 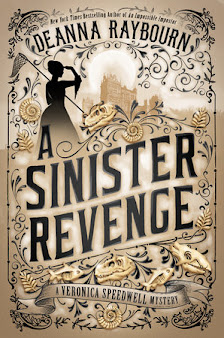 Veronica must find and stop a devious killer when a group of old friends is targeted for death in this new adventure from the New York Times bestselling and Edgar Award–nominated author Deanna Raybourn.

Veronica’s natural-historian beau, Stoker, has been away in Bavaria for months and their relationship is at an impasse. But when Veronica shows up before him with his brother, Tiberius, Lord Templeton-Vane, he is lured back home by an intriguing job offer: preparing an iguanodon for a very special dinner party.

Tiberius has received a cryptic message—along with the obituaries of two recently deceased members of his old group of friends, the Seven Sinners—that he too should get his affairs in order. Realizing he is in grave danger but not knowing why, he plans a reunion party for the remaining Sinners at his family estate to lure the killer out while Veronica and Stoker investigate.

As the guests arrive and settle in, the evening’s events turn deadly. More clues come to light, leading Veronica, Stoker, and Tiberius to uncover a shared past among the Sinners that has led to the fatal present. But the truth might be far more sinister than what they were prepared for.

Kindle edition, 336 pages
Expected publication March 7, 2023
by Berkley Publishing Group
3.5/5 stars
For much of November I was in a reading slump, and even though A  Sinister Revenge does not release well into the new year, I felt I needed a visit with some old friends, and went in with fingers crossed that it would get me out of my slump.
Opening up this book felt like getting together with some old friends, and I might even have sighed a little while I hunkered down to the familiar writing of Deanna Raybourn.

Veronica and Stoker are my one of my favorite literary couples. They bring life to a story with their escapades, banter and unique settings. With A Sinister Revenge, I was given a deeper glimpse into the life of Stoker's family, his hometown and some of his growing up years.  The mystery was an intriguing part of the story. New characters were brought to the scene and ultimately a conclusion that in typical Speedwell fashion came with peril and danger. But while I enjoyed this book, there were some aspects that were missing and characters I didn’t see nearly as much as I wanted to.  The typical bantering was lacking and seriously missed.
But all in all another great installment in this series that has me already wondering what is next for Veronica and Stoker.
My thanks to Berkley Publishing for a digital arc (via Edelweiss) in exchange for a honest review.
Posted by Margaret @ JustOneMoreChapter at 6:00 AM