Once More Unto the Breach by Meghan Holloway 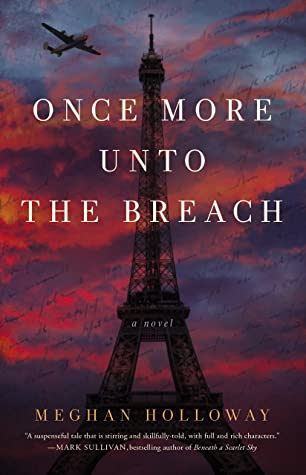 For readers of The Nightingale and Beneath a Scarlet Sky comes a gripping historical thriller set against a fully-realized WWII backdrop about the love a father has for his son and the lengths he is willing to go to find him, from a talented new voice in suspense.

Rhys Gravenor, Great War veteran and Welsh sheep farmer, arrives in Paris in the midst of the city's liberation with a worn letter in his pocket that may have arrived years too late. As he follows the footsteps of his missing son across an unfamiliar, war-torn country, he struggles to come to terms with the incident that drove a wedge between the two of them.

Joined by Charlotte Dubois, an American ambulance driver with secrets of her own, Rhys discovers that even as liberation sweeps across France, the war is far from over. And his personal war has only begun as he is haunted by memories of previous battles and hampered at every turn by danger and betrayal. In a race against time and the war, Rhys follows his son's trail from Paris to the perilous streets of Vichy to the starving mobs in Lyon to the treacherous Alps. But Rhys is not the only one searching for his son. In a race of his own, a relentless enemy stalks him across the country and will stop at nothing to find the young man first.

The country is in tatters, no one is trustworthy, and Rhys must unravel the mystery of his son's wartime actions in the desperate hope of finding him before it's too late. Too late to mend the frayed bond between them. Too late to beg his forgiveness. Too late to bring him home alive.

Kindle Edition
Published May 14th 2019
by Polis Books
4/5 stars
This is Meghan Holloway's debut and she is off to a great start.  Told mainly from the POV of Rhys Gravenor as his searches for his missing son in war torn France.
This was quite the journey for Rhys as he is aided and be friended with Charlotte (an ambulance driver) and Otto, a stray dog.  Not only does Rhys learn much about his son, Owain's,  role these last few years but Rhys also reminiscences over the past which was carefully woven throughout this story.
The author stayed true to history, her research is evident. Her characters are memorable and well written.  Once More the Breach is a story of parental love and heartache.  There is danger and mystery, betrayal and surprises.  Definitely a story that was enjoyable to read with a writing style that was engaging.
A great debut and an author I will be reading more of.
Posted by Margaret @ JustOneMoreChapter at 5:03 PM