You Have a Match by Emma Lord 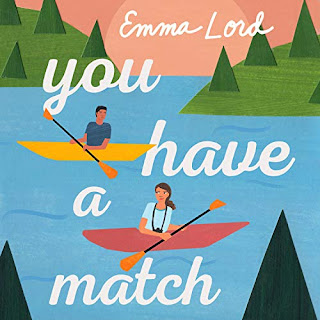 A NEW LOVE, A SECRET SISTER, AND A SUMMER SHE'LL NEVER FORGET.

FROM THE BELOVED AUTHOR OF 'TWEET CUTE' COMES EMMA LORD'S 'YOU HAVE A MATCH', A HILARIOUS AND HEARTFELT NOVEL OF ROMANCE, SISTERHOOD, AND FRIENDSHIP. . .

When Abby signs up for a DNA service, it’s mainly to give her friend and secret love interest, Leo, a nudge. After all, she knows who she is already: Avid photographer. Injury-prone tree climber. Best friend to Leo and Connie. . .although ever since the B.E.I. (Big Embarrassing Incident) with Leo, things have been awkward on that front.

But she didn’t know she’s a younger sister.

When the DNA service reveals Abby has a secret sister, shimmery-haired Instagram star Savannah Tully, it’s hard to believe they’re from the same planet, never mind the same parents - especially considering Savannah, queen of green smoothies, is only a year and a half older than Abby herself.

The logical course of action? Meet up at summer camp (obviously) and figure out why Abby’s parents gave Savvy up for adoption. But there are complications: Savvy is a rigid rule-follower and total narc. Leo is the camp’s co-chef, putting Abby's growing feelings for him on blast. And her parents have a secret that threatens to unravel everything.

But part of life is showing up, leaning in, and learning to fit all your awkward pieces together. Because sometimes, the hardest things can also be the best ones.

Audiobook, 9 hours
Published January 12, 2021
by Macmillan Audio
4/5 stars
This was a fun audio book.  A YA summer read which I listened to earlier in the year.  It had the makings of the perfect beach read - friends, summer camp and family drama.
It was mysterious in how the sisters were separated.  Family drama which goes back to the previous comment.  Friends with secrets, a famous influencer after the best picture (and smoothie) whether it be to catch the sunrise or perfect beach shot.  Along with the antics of summer camp - hiking, getting lost and much more.
The characters were typical teenagers doing typical teenager things. The story was unveiled step by step to a nice ending.
Like I said a fun read that I'm sure works as well in formats other than an audiobook.
My copy was obtained via Overdrive through my local public library.
Posted by Margaret @ JustOneMoreChapter at 5:00 AM