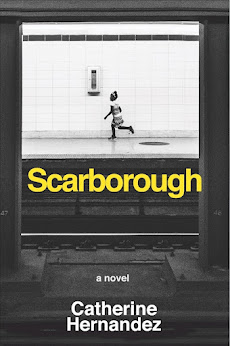 Scarborough is a low-income, culturally diverse neighborhood east of Toronto, the fourth largest city in North America; like many inner city communities, it suffers under the weight of poverty, drugs, crime, and urban blight. Scarborough the novel employs a multitude of voices to tell the story of a tight-knit neighborhood under fire: among them, Victor, a black artist harassed by the police; Winsum, a West Indian restaurant owner struggling to keep it together; and Hina, a Muslim school worker who witnesses first-hand the impact of poverty on education.

And then there are the three kids who work to rise above a system that consistently fails them: Bing, a gay Filipino boy who lives under the shadow of his father's mental illness; Sylvie, Bing's best friend, a Native girl whose family struggles to find a permanent home to live in; and Laura, whose history of neglect by her mother is destined to repeat itself with her father.

Scarborough offers a raw yet empathetic glimpse into a troubled community that locates its dignity in unexpected places: a neighborhood that refuses to be undone.

Catherine Hernandez is a queer theatre practitioner and writer who has lived in Scarborough off and on for most of her life. Her plays Singkil and Kilt Pins were published by Playwrights Canada Press, and her children's book M is for Mustache: A Pride ABC Book was published by Flamingo Rampant. She is the Artistic Director of Sulong Theatre for women of color.

Kindle, 272 pages
Published May 22nd 2017
by Arsenal Pulp Press
2.5/5 stars
Scarborough was another read from our Family Blessings Book Club.  Picked by son #1, for various reasons, one being the close proximity from Toronto and some kind of connection through his MFA program.
Four of us read this and 3 kinda felt the same way I did.  That this was a hard book to read, it was a hard on a number of different levels.
1.  If I lived in Scarborough I would be offended that my hometown was portrayed in this manner.  Yes I get there are bad sections to every city but this comes across like the whole city is a mess.
2.  There were too many characters, just when I got them all straight the author throws in some more.  At first I attributed my confusion to my age but alas the younger crowd felt the same way - one even made up a spread sheet.
3. There were a number of POV which kinda reflects my previous point. Also I found some didn't really add to the story other than to portray the despair of the area. Some scenes repeated as told from a different POV.
I struggled to figure out what genre this book fits into.  Not literary or genre fiction other than maybe book club fiction (is that a thing?) because it would make for a lot of  discussions.
I am all for trying new avenues to read and I can't fault the author when I read outside my usual area.  But with this book I struggled to find the purpose of the story.  The ending left me frustrated and sad.
Scarborough is a story with multiple stories lines, its raw and descriptive . As I understand there is a film in the making, I am curious to see how that turns out.
My copy was obtained through Scribd.
Posted by Margaret @ JustOneMoreChapter at 2:41 PM