The Secret Life of Shirley Sullivan by Lisa Ireland 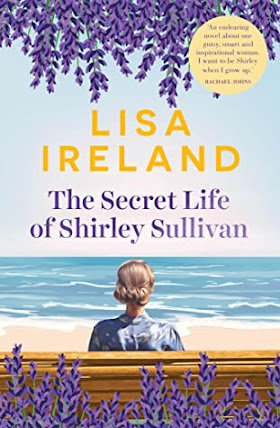 'Elderly. Is that how the world sees me? A helpless little old lady? If only they knew. I allow myself a small smirk.'

When Shirley Sullivan signs her 83-year-old husband, Frank, out of the Sunset Lodge Nursing Home, she has no intention of bringing him back.

For fifty-seven years the couple has shared love, happiness and heartbreak. And while Frank may not know who his wife is these days, he knows he wants to go home. Back to the beach where they met in the early 1960s . . .

So Shirley enacts an elaborate plan to evade the authorities – and their furious daughter, Fiona – to give Frank the holiday he’d always dreamed of.

And, in doing so, perhaps Shirley can make amends for a lifelong guilty secret . . .

Paperback, 336 pages
Published April 28th 2020
by Penguin Random House Australia
3/5 stars
This is my first time reading Lisa Ireland, she came highly recommended in my quest to discover Australian authors that we don't see much of in Canada.
This is a dual time period story where eventually the 2 storylines mesh.  The younger Shirley pales in comparison to the older version.  Her journey of self discovery, in the 1960/70s I might add, was also a journey for myself as I watched the era play out. It's a time period I grew up in and could appreciate what was going on.  Feminism was becoming a thing in Australia as it was in North America.  Women wanted a voice and began to stand up for their rights.
The older Shirley was confident, protective of Frank.  While their adventure was interesting over time it was a bit repetitive and honestly I struggled to pick the book up at times.  But that being said I genuinely wanted to know the ending.
Another struggle I had was the fact I couldn't picture the younger/growing up Shirley with the older Shirley. The older one is gutsy, for her age she tackled electronics and educated herself while stepping away from her comfort zone, determination will do that.  But I just couldn't see the 2 being the same person.
So the ending...I wish I could say more but suffice to say I wasn't a huge fan of it.  You can pop on over to Goodreads for more insight but it will be hidden behind that spoiler button.  It would make for a great book club discussion.
All in all an okay read with some funny and heartbreaking scenes.
This book was part of my 21 Reading Off My Shelf Challenge.
Posted by Margaret @ JustOneMoreChapter at 11:04 AM

Email ThisBlogThis!Share to TwitterShare to FacebookShare to Pinterest
Labels: 2021, 2021 Reading Off My Shelf, Australian author, Lisa Ireland, New to me author