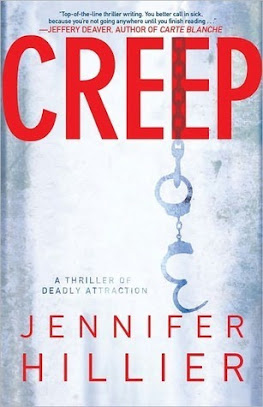 Pulsing with the dark obsession of Radiohead’s song “Creep,” this taut thriller—Jennifer Hillier’s superb debut—rockets from its seductive opening to a heartpounding climax not easily forgotten.

Dr. Sheila Tao is a professor of psychology. An expert in human behavior. And when she began an affair with sexy, charming graduate student Ethan Wolfe, she knew she was playing with fire. Consumed by lust when they were together, riddled with guilt when they weren’t, she knows the three-month fling with her teaching assistant has to end. After all, she’s finally engaged to a kind and loving investment banker who adores her, and she’s taking control of her life. But when she attempts to end the affair, Ethan Wolfe won’t let her walk away.

Ethan has plans for Sheila, plans that involve posting a sex video that would surely get her fired and destroy her prestigious career. Plans to make her pay for rejecting him. And as she attempts to counter his every threatening move without her colleagues or her fiancé discovering her most intimate secrets, a shattering crime rocks Puget Sound State University: a female student, a star athlete, is found stabbed to death. Someone is raising the stakes of violence, sex, and blackmail . . . and before she knows it, Sheila is caught in a terrifying cat-and-mouse game with the lover she couldn’t resist—who is now the monster who won’t let her go.
Kindle Edition, 432 pages
First published July 5, 2011
by Gallery Books
4/5 stars
If Jennifer Hillier wasn't already in my auto read list, Creep clinched it.  This was her debut?
Contrary to what the title feels like this book was not as creepy as anticipated.  It wasn't until closer to the end when I learned how it originated.  But rather Creep is a suspense mystery that kept me on my toes.
Coming in at 432 pages it isn't a small book but action packed with the depth of character and twists that made the pages fly by.  Creep messes with the mind as Sheila tries to control a situation her lust got her into.  Beware who you get involved with, could turn around and bite you...well you know where.
Creep is a well written story with a complicated plot and many layers. The characters are unreliable rounding out this book nicely. Definitely an author and book I recommend.
Creep is part of my Kindle library, originally purchased as a Kindle deal.
Posted by Margaret @ JustOneMoreChapter at 3:50 PM