The Younger Wife by Sally Hepworth 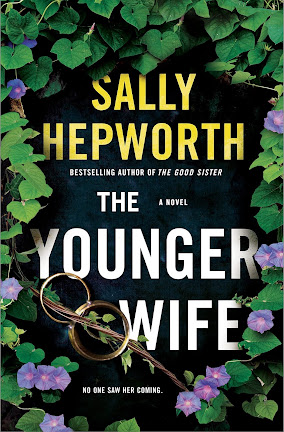 Stephen Aston is getting married again. The only problem is, he's still married to his first wife, even though she is in a care facility for dementia. But he'll take care of that easily, by divorcing her--even if his adult daughters protest.

Tully and Rachel Aston look upon Heather as nothing but an interloper. Heather is the same age as Rachel and even younger than Tully. Clearly she's a golddigger and after their father's money. Heather has secrets that she's keeping close, and reasons of her own for wanting to marry Stephen.

With their mother unable to speak for herself, Tully and Rachel are determined to get to the truth about their family's secrets, the new wife closing in, and who their father really is. But will getting to the truth unleash the most dangerous impulses...in all of them?

Kindle Edition, 352 pages
First published October 26, 2021
by St. Martin's Press
3/5 stars
I have been a die hard Sally Hepworth fan since her first book, The Secret of Midwives was first released.
Hepworth knows how to grab this reader's attention.  That opening chapter had me itching to read more and unravel what was going on.  With alternating POV it shows a family with lots of secrets.  Though I couldn't really connect with these women I did get to know them.  There were twists and turns, numerous times I thought I knew what was going on only to be foiled again.
I wouldn't call this a thrilled but rather a domestic drama.  Women with issues and to be honest I get the root of these issues for 2 of them but not the other - maybe I missed something important but I don't think so.
The Younger Wife is a story of relationships, tons of gaslighting and over coming.   I don't expect my books to have a happy ending all the time but I do like a solid conclusion that leaves me feeling satisfied and unfortunately this one didn't.  In fact I would have giving this book 4 stars and maybe even more but I feel cheated and let down (for so many reasons that I can't go into).
Australian author Sally Hepworth will continue to be a go to author for me.  I did love the acknowledgements and the seeds that planted this book.
My thanks to St. Martin's Press (via Netgalley) for an advanced digital copy in exchange for a honest review.
Posted by Margaret @ JustOneMoreChapter at 12:01 PM