Review: Under the Southern Sky by Kristy Woodson Harvey 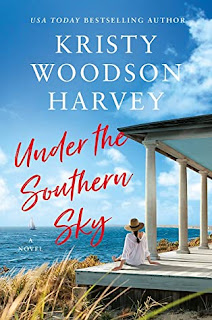 Amelia Buxton, a dedicated journalist and a recent divorcée, never expected that uncovering the biggest story of her career would become deeply personal. But when she discovers that a cluster of embryos belonging to her childhood friend Parker and his late wife Greer have been deemed “abandoned,” she’s put in the unenviable position of telling Parker—and dredging up old wounds in the process.

Parker has been unable to move forward since the loss of his beloved wife three years ago. He has all but forgotten about the frozen embryos, but once Amelia reveals her discovery, he knows that if he ever wants to get a part of Greer back, he’ll need to accept his fate as a single father and find a surrogate.

Each dealing with their own private griefs, Parker and Amelia slowly begin to find solace in one another as they navigate an uncertain future against the backdrop of the pristine waters of their childhood home, Buxton Beach. The journey of self-discovery leads them to an unforgettable and life-changing lesson: Family—the one you’re born into and the one you choose—is always closer than you think.

From “the next major voice in Southern fiction” (Elin Hilderbrand, #1 New York Times bestselling author), Under the Southern Sky is a fresh and unforgettable exploration of love, friendship, and the unbreakable ties that bind.

Kindle Edition
Published April 20th 2021
by Gallery Books
4.5/5 stars
I've wanted to read this book since the Facebook Group, The Friends & Fiction Book Club started during the first lockdown (we are on #3 at the moment). Five authors who get together to chat books with guest authors.  I was familiar with some of the authors but those I wasn't, I wanted to read.  Which brings me to Kristy Woodson Harvey.
Under the Southern Sky recently released and my big question was was this going to live up to all the hype I've seen on social media.  The answer for me is a resounding yes it did.  I did a combination read and audiobook.  I recommend both.  With 2 major POVs and 2 smaller parts, the audio had a different voice for each one - I love that.  It sets the tone and gives each character a voice that matched their personality.
The story was unique with characters that were authentic.  It had a nice balance between a lighter tone and then more serious for the emotional parts.  There are some serious topics - grief and fertility, both of which were handled with respect and heart.
Under the Southern Sky is a story of love and loss, family and friends, and self discovery. Definitely one I recommend.
Posted by Margaret @ JustOneMoreChapter at 10:41 PM