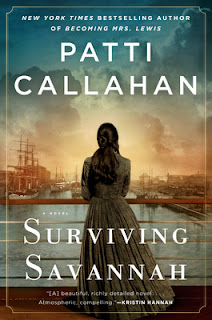 It was called "The Titanic of the South." The luxury steamship sank in 1838 with Savannah's elite on board; through time, their fates were forgotten--until the wreck was found, and now their story is finally being told in this breathtaking novel from the New York Times bestselling author of Becoming Mrs. Lewis.

When Savannah history professor Everly Winthrop is asked to guest-curate a new museum collection focusing on artifacts recovered from the steamship Pulaski, she's shocked. The ship sank after a boiler explosion in 1838, and the wreckage was just discovered, 180 years later. Everly can't resist the opportunity to try to solve some of the mysteries and myths surrounding the devastating night of its sinking.

Everly's research leads her to the astounding history of a family of eleven who boarded the Pulaski together, and the extraordinary stories of two women from this family: a known survivor, Augusta Longstreet, and her niece, Lilly Forsyth, who was never found, along with her child. These aristocratic women were part of Savannah's society, but when the ship exploded, each was faced with difficult and heartbreaking decisions.
This is a moving and powerful exploration of what women will do to endure in the face of tragedy, the role fate plays, and the myriad ways we survive the surviving.
Hardcover, 432 pages
Published March 9th 2021
by Berkley
4.5/5 stars
Surviving Savannah was one of my highly anticipated books of 2021.  I can't really explain other then between the author, THAT cover and the historical story this was a preorder for me.  My instincts were correct.
Even though this was a slower paced story I found it captivating.  I love reading pieces of history that I'm unfamiliar with, which was the case with the Pulaski sinking.  One might think being only 30 miles off the coast isn't that far but it's 1838 with no way to call for help.  Told between Lilly and Augusta a vivid picture was painted of what could have happened along with the physical and emotional trauma that went with it.  There were times I questioned the pace but in the end I understood and appreciated looking at the whole picture when I finished the book.
Present day is the story of Everly, and while the blurb doesn't give much of the story away (thank you publisher) she under takes a journey during her research.  I loved the historical part, learning more about Savannah in both the past and present day.  Its a place that has been bumped up higher on my bucket list. Suffice to say I really enjoyed reading this book.  It wasn't one I rushed through but savored the writing and getting to know some wonderful characters and places to visit.

"You know," he said finally, "not everyone who survives trauma becomes a better person.  The idea that surviving brings everyone to a new and better place is a lie told by people who need the world to make sense."

The book ended with some wonderful author notes and a chapter on resources and facts which I found informative and sent me off to google on a quest for pictures.
This book was part of my 2021 Reading off my Shelf Challenge.
Posted by Margaret @ JustOneMoreChapter at 10:22 PM