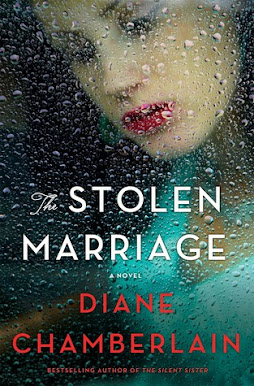 Steeped in history and filled with heart-wrenching twists, The Stolen Marriage is an emotionally captivating novel of secrets, betrayals, prejudice, and forgiveness. It showcases Diane Chamberlain at the top of her talent.

One mistake, one fateful night, and Tess DeMello’s life is changed forever.

It is 1944. Pregnant, alone, and riddled with guilt, twenty-three-year-old Tess DeMello abruptly gives up her budding career as a nurse and ends her engagement to the love of her life, unable to live a lie. Instead, she turns to the baby’s father for help and agrees to marry him, moving to the small, rural town of Hickory, North Carolina. Tess’s new husband, Henry Kraft, is a secretive man who often stays out all night, hides money from his new wife, and shows her no affection. Tess quickly realizes she’s trapped in a strange and loveless marriage with no way out.

The people of Hickory love and respect Henry but see Tess as an outsider, treating her with suspicion and disdain. When one of the town’s golden girls dies in a terrible accident, everyone holds Tess responsible. But Henry keeps his secrets even closer now, though it seems that everyone knows something about him that Tess does not.

When a sudden polio epidemic strikes Hickory, the townspeople band together to build a polio hospital. Tess knows she is needed and defies Henry’s wishes to begin working at there. Through this work, she begins to find purpose and meaning. Yet at home, Henry’s actions grow more alarming by the day. As Tess works to save the lives of her patients, can she untangle the truth behind her husband’s mysterious behavior and find the love—and the life—she was meant to have?

Hardcover, 376 pages
Published October 3rd 2017
by St. Martin's Press
3.5/5 stars
Diane Chamberlain had me at The Midwife's Confession and I haven't looked back.  This is my 7th book and I still have a ways to go with her backlist.  Her books are usually 4/5 stars, which is why she is an auto read author.  Somehow I missed The Stolen Marriage and grabbed the audio when it was a deal over at Chirp.
This one has the historical aspect that I love.  The polio epidemic of 1945 was new for me, I found it not just educational but heartbreaking as well.  The treatment and isolation for that time seems so primitive now, thank goodness for the advancements made.
Tess's story was interesting enough serving as a set up for the last half of the book.  It wasn't as captivating as I'd hoped or come to expect in a Chamberlain book.  Whether listening verse reading played a part I am not sure.  I found the story slow moving and while Henry's actions were mysterious some parts were predictable.
While this isn't my favourite Diane Chamberlain book she remains an auto read and author I recommend.
Posted by Margaret @ JustOneMoreChapter at 11:10 PM

Email ThisBlogThis!Share to TwitterShare to FacebookShare to Pinterest
Labels: 2021, 2021 Reading Off My Shelf, a, Audiobook, Chirp, Diane Chamberlain