Review: The Butcher by Jennifer Hillier 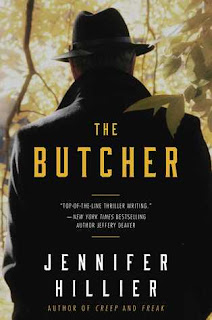 A rash of grisly serial murders plagued Seattle until the infamous "Beacon Hill Butcher" was finally hunted down and killed by police chief Edward Shank in 1985. Now, some thirty years later, Shank, retired and widowed, is giving up his large rambling Victorian house to his grandson Matt, whom he helped raise.

Settling back into his childhood home and doing some renovations in the backyard to make the house feel like his own, Matt, a young up-and-coming chef and restaurateur, stumbles upon a locked crate he’s never seen before. Curious, he picks the padlock and makes a discovery so gruesome it will forever haunt him… Faced with this deep dark family secret, Matt must decide whether to keep what he knows buried in the past, go to the police, or take matters into his own hands.

Meanwhile Matt’s girlfriend, Sam, has always suspected that her mother was murdered by the Beacon Hill Butcher—two years after the supposed Butcher was gunned down. As she pursues leads that will prove her right, Sam heads right into the path of Matt’s terrible secret.

Kindle Edition, 352 pages
Published July 15th 2014
by Gallery Books
3.5/5 stars
This is Canadian author, Jennifer Hillier's 3rd book.  I've read a number of her recent releases and am continuing on my journey to read her backlist.
This was an audio read (via Scribd), coming in at almost 10 hours.  The Butcher is high up there on the creepy factor - even the cover screams creep.  But knowing who the killer is right from the beginning is a new one for me.  At first I wasn't impressed with that knowledge but as the story progressed and knowing that fact just made the story all the more intriguing.  There are a nice variety of characters with unique and personalities that rounded this story out nicely. The various relationships and interconnections added to the suspense.
As for the mystery, what can I say other then it was totally whacked (see blurb above) and I mean that in a good way.  There were twists and turns, some I saw coming and others not so much.  I found excuses to continue listening just to see the outcome.
The Butcher is a book that can be gruesome at times with a mature subject matter.  I don't recommend for the squeamish as it's rather dark and disturbing.  I'm glad that I went the audio route, though I did find the voice of Matt a tad annoying (whiny actually) and I don't think that was the author's intend.