Review: Letters Across the Sea by Genevieve Graham 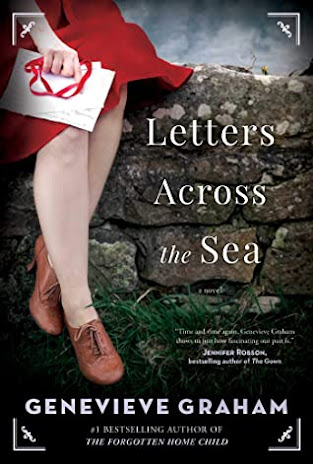 Inspired by a little-known chapter of World War II history, a young Protestant girl and her Jewish neighbour are caught up in the terrible wave of hate sweeping the globe on the eve of war in this powerful love story from the #1 bestselling author of The Forgotten Home Child.

I’m writing to say goodbye…
With all my love,
M

At eighteen, Molly Ryan feels as though she is always looking for work to help her family through the Great Depression crippling her city. The one bright spot in her life is playing baseball with her best friend, Hannah Dreyfus, and sneaking glances at Hannah’s handsome older brother, Max. Molly knows that her Irish Protestant parents disapprove of her spending so much time with their Jewish neighbours, and she also sees the signs that say “No Jews Allowed” outside Toronto’s stores and parks. But unlike many of the city’s residents, Molly doesn’t blame Hannah and Max for the mass unemployment and unrest—they’re her beloved childhood friends.

As more of Hitler’s hateful ideas cross the sea, tensions between the two families and their communities rise, spilling over one smouldering day in August when a local “Swastika Club” unfurls a huge white banner bearing the Nazi symbol at a baseball game. A riot erupts, throwing Molly and Max together and sparking a secret they must keep from everyone they love.

When Max enlists to fight overseas, their love is put to the ultimate test, the letters between them a tenuous bond. By war’s end, both of their families will be scarred by painful betrayal as devastating truths come to light.

Perfect for readers of The Daughter’s Tale and The Guernsey Literary and Potato Peel Pie Society, Letters Across the Sea is a poignant novel about the enduring power of love to cross dangerous divides even in the darkest of times.

Kindle Edition
Expected publication: April 27th 2021
by Simon & Schuster Canada
4.5/5 stars
One of the things I love about reading a Genevieve Graham book is that her love of history shines through, especially when it deals with Canadian history.  She was raised in Toronto and chose to bring to life some unflattering pieces of its past.  I knew nothing of Christie Pit and the anti Semitic behaviour during the Great Depression was just so sad to read about.
Most WW2 books don't talk much about the involvement of Canadian troops but here I learned about the Battle of Hong Kong and it wasn't a pretty picture. How is that not taught in Canadian schools?
With two time periods we watch Molly Ryan grow up during tumultuous times, especially as friends and family take a stand, sadly at times against each other. As war breaks out there are parts of Canada's involvement  that I learned about - it's great that Molly is a journalist.
Letters Across the Sea is a well researched and written story, it's emotional, the characters are genuine and the plot kept my attention.  There is heartache and guilt but a midst that is also kindness and compassion.  Definitely an author and book I highly recommend.
My thanks to Simon & Schuster Ca (via Netgalley) for a digital arc in exchange for a honest review.
Posted by Margaret @ JustOneMoreChapter at 10:10 PM