Review: The Woman Outside My Door by Rachel Ryan 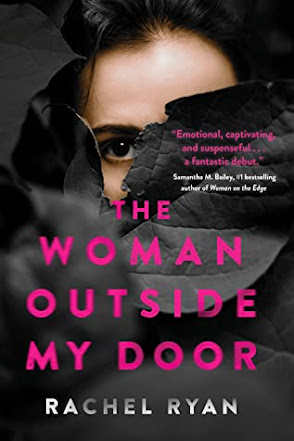 From an unforgettable new voice in suspense fiction, The Woman Outside My Door is a thrilling page-turner about a young mother who can’t shake the feeling that her son’s “imaginary” friend is putting him in very real danger, and she will stop at nothing to keep him safe—perfect for fans of Lisa Jewell and Mary Kubica.
All children have imaginary friends, Georgina tells herself. It’s perfectly normal, and they all grow out of it in the end. But when her seven-year-old son, Cody, tells her about New Granny, the new friend he’s met in the park, Georgina is instantly suspicious. Something—call it maternal instinct—tells her he isn’t making it up.

But maybe Georgina is losing her mind. It wouldn’t be the first time, after all. And with her own mother’s recent death leaving her bereft and trying to cope with life as a busy working mom, it’s no wonder she’s feeling paranoid that Cody has invented a “New Granny” to replace his beloved grandmother.

Her husband, Bren, becomes the voice of reason, assuring Georgina that it’s just a game, the product of their son’s overactive imagination. But what if Cody’s imaginary friend is not so imaginary after all?

Kindle, 288 pages
Expected publication: November 24th 2020
by Simon & Schuster Canada
3/5 stars
It's always fun discovering a new author, especially when highly recommended by some of my favourite authors.
The first half of The Woman Outside My Door might have been slow but it was interesting as Cody begins talking about his New Granny six months following the death of his real one. Things were a little repetitive for that first half, which I took as the stage being set for the last half.

There was lots of gas lighting and red herrings going on that paved the way for different outcomes. Everyone was suspicious in my eyes. Was Georgina losing it? Or was Cody, though he seemed older than his seven years. The husband was just bland and untrustworthy. Perfect setting, right?

Things changed about 52% and I finished that day, needing to find out if my suspicions were correct. Were they? The fun part, for this reader, is playing sleuth, unravelling the clues and seeing if I can solve the mystery before the big reveal.  Didn't happen here,  hop on over to my Goodreads review and see my thoughts hidden by the spoiler button

This is the authors debut and while I wasn’t thrilled with the endings execution she did write an engaging story that had me genuinely curious to what was going on.

My thanks to Simon & Schuster CA (via Netgalley) for an advanced copy in exchange for honest review.
Posted by Margaret @ JustOneMoreChapter at 6:48 AM