Review: The Arctic Fury: A Novel by Greer Macallister 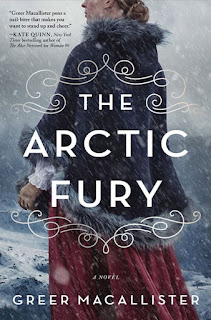 A dozen women join a secret 1850's Arctic expedition—and a sensational murder trial unfolds when some of them don't come back.

Eccentric Lady Jane Franklin makes an outlandish offer to adventurer Virginia Reeve: take a dozen women, trek into the Arctic, and find her husband's lost expedition. Four parties have failed to find him, and Lady Franklin wants a radical new approach: put the women in charge.

A year later, Virginia stands trial for murder. Survivors of the expedition willing to publicly support her sit in the front row. There are only five. What happened out there on the ice?

Set against the unforgiving backdrop of one of the world's most inhospitable locations, USA Today bestselling author Greer Macallister uses the true story of Lady Jane Franklin's tireless attempts to find her husband's lost expedition as a jumping-off point to spin a tale of bravely, intrigue, perseverance and hope.

Kindle Edition
Expected publication: December 1st 2020
by Sourcebooks Landmark
3/5 stars
The Arctic Fury had me with that cover.   I got the chills just looking at it and I'm coveting that jacket/cape - looks like the perfect thing for the location. From the blurb I found it hard to imagine a dozen women (or anyone for that matter) braving the Arctic elements in search of Franklin.
It's the mid 1850's when Victoria is approached and takes on the challenge to discover the fate of the Franklin exhibition.  I had hoped this was based on fact but alas, while there were multiple searches made for the crew this isn't one of them.
Told with a dual narrative that are not too far apart, time wise.  The journey is told mostly via Victoria but also a few snippets from a couple of the other women - that I liked and wished for more, just to connect and really get to know the different personalities on board.  That being said there is a large cast of characters to keep track of. The interaction I was hoping for didn't happen till later on and for me that might have been a little too late to get a true picture of the relationships.
The other narrative was the murder trial and Victoria's incarceration.  That was a little slow moving and repetitive in terms of accommodations and also frustrating to read, so hats off to the author for creating that kind of emotion in this reader.
Greer Macallister created an atmosphere story that reflected the times, from the streets of Boston, paddling the lakes, the cold of the north and finally back to Boston.  The Arctic Fury was an interesting concept which will appeal to readers that like something off the beaten path.
My thanks to Sourcebooks (via Netgalley) for an advanced copy in exchange for an honest review.
Posted by Margaret @ JustOneMoreChapter at 6:54 PM