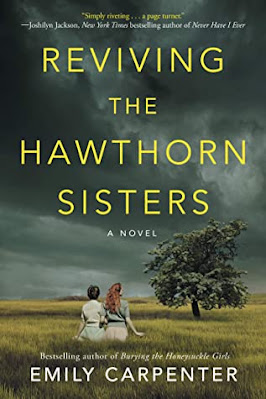 The bestselling author of Burying the Honeysuckle Girls returns to uncover a faith healer’s elusive and haunted past.

Dove Jarrod was a renowned evangelist and faith healer. Only her granddaughter, Eve Candler, knows that Dove was a con artist. In the eight years since Dove’s death, Eve has maintained Dove’s charitable foundation—and her lies. But just as a documentary team wraps up a shoot about the miracle worker, Eve is assaulted by a vengeful stranger intent on exposing what could be Dove’s darkest secret: murder…

Tuscaloosa, 1934: a wily young orphan escapes the psychiatric hospital where she was born. When she joins the itinerant inspirational duo the Hawthorn Sisters, the road ahead is one of stirring new possibilities. And with an obsessive predator on her trail, one of untold dangers. For a young girl to survive, desperate choices must be made.

Now, to protect her family, Eve will join forces with the investigative filmmaker and one of Dove’s friends, risking everything to unravel the truth behind the accusations against her grandmother. But will the truth set her free or set her world on fire?
Kindle Edition
Expected publication: October 20th 2020
by Lake Union Publishing
3.5/5 stars
The Weight of Lies was my introduction to Emily Carpenter, an intriguing mystery that kept me glues to the pages.
Reviving the Hawthorn Sisters is a dual time period story about Dove Jarrod and her granddaughter Eve.  There is a lot going on, Dove escaping from an asylum and her journey to become a famous faith healer.  It's the family secrets that face exposure that forces Eve to uncover the truth before damage can be done.
I really enjoyed the historical setting, it was during the 1930's that Dove's story begins.  There are revival meetings in the south that added charm but at times I was overwhelmed with the large cast of characters. The past story line was my favourite, there was a little bit of mystery, southern charm and an era with its faith healers that interested me, I would have loved for the whole book to take place in 1934.
It wasn't until afterwards that I realised this is the sequel to The Honeysuckle Girls (which I haven't read). Though Revival worked as a stand along I do wonder if I knew more about Dove if it would have impacted this read.
Revival of the Hawthorn Sisters releases today and available for purchase.
My thanks to Lake Union Publishing (via Netgalley) for a digital ARC in exchange for an honest review.
Posted by Margaret @ JustOneMoreChapter at 10:40 PM