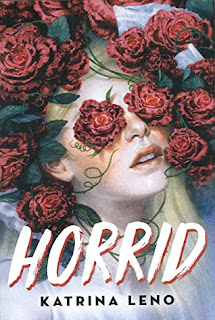 Following her father's death, Jane North-Robinson and her mom move from sunny California to the dreary, dilapidated old house in Maine where her mother grew up. All they want is a fresh start, but behind North Manor's doors lurks a history that leaves them feeling more alone...and more tormented.
As the cold New England autumn arrives, and Jane settles in to her new home, she finds solace in old books and memories of her dad. She steadily begins making new friends, but also faces bullying from the resident "bad seed," struggling to tamp down her own worst nature in response. Jane's mom also seems to be spiralling with the return of her childhood home, but she won't reveal why. Then Jane discovers that the "storage room" her mom has kept locked isn't for storage at all -- it's a little girl's bedroom, left untouched for years and not quite as empty of inhabitants as it appears....

Is it grief? Mental illness? Or something more... horrid?

Hardcover, Owlcrate Edition, 322 pages
Published September 15th 2020 by
Little, Brown Books for Young Readers
3.5/5 stars
I went into this read blind, no idea what it was about. If it wasn’t for the fact it showed up in my September OwlCrate box I don’t think I would have given it the time of day - I mean look at that cover (not a fan).

Moving clear across the country is how Jane’s story begins. I enjoyed the writing, it was my first time reading Katrina Leno. She grabbed me right away with some quirkyness (don’t think that’s a word) and a character that I felt compassion for.

There is this old family home that’s been empty for a couple years. There is the history that this small town remembers and some hostile people. There are the things her mother won’t share and things that go bump in the night. All the makings for a creepy read, perfect for this time of year.

As the story developed I’ll admit to being stumped as to what was going on, so hats off to the author for keeping me in the dark. Horrid had the ghosty vibes, secrets and things that go creak along with the unexplainable.

It was a solid 4 stars until I got to the ending. I was left with some unanswered questions that had me scratching my head. I get the conclusion but in hindsight left wondering about some issues. That being said it could very well just be me as there are lots of 5 stars out there for this read.

This book was part of my 2020 Reading Off my Shelf Challenge
Posted by Margaret @ JustOneMoreChapter at 10:36 PM

Email ThisBlogThis!Share to TwitterShare to FacebookShare to Pinterest
Labels: 2020, Katrina Leno, New to me author, OwlCrate