Review: Whose Waves These Are by Amanda Dykes 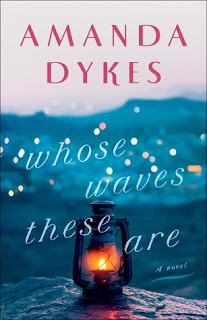 In the wake of WWII, a grieving fisherman submits a poem to a local newspaper: a rallying cry for hope, purpose . . . and rocks. Send me a rock for the person you lost, and I will build something life-giving. When the poem spreads farther than he ever intended, Robert Bliss's humble words change the tide of a nation. Boxes of rocks inundate the tiny, coastal Maine town, and he sets his calloused hands to work, but the building halts when tragedy strikes.

Decades later, Annie Bliss is summoned back to Ansel-by-the-Sea when she learns her Great-Uncle Robert, the man who became her refuge during the hardest summer of her youth, is now the one in need of help. What she didn't anticipate was finding a wall of heavy boxes hiding in his home. Long-ago memories of stone ruins on a nearby island trigger her curiosity, igniting a fire in her anthropologist soul to uncover answers.

She joins forces with the handsome and mysterious harbor postman, and all her hopes of mending the decades-old chasm in her family seem to point back to the ruins. But with Robert failing fast, her search for answers battles against time, a foe as relentless as the ever-crashing waves upon the sea.

Whose Waves Are These is an intricately woven story that was pictorial with a quaint setting and an interesting cast of characters.

Spanning many decades this book was written in dual time periods that had me captivated with both of them equally, and I’ll admit that isn’t always the case as I usually prefer one over the other.

This is the author’s debut and I was blown away when I found that out. She has a style that had me mesmerized with her attention to detail, everything fit into place and was there for a reason. The story of the rocks was unique and as everything began to click together it just made me love this book all the more. The characters were real and the plot emotional as the war leaves its mark on this little place called Ansel-by-The-Sea.

Whose Waves These Are is not just a story of secrets, heartache, and guilt, but also of forgiveness, hope, and healing. It's an emotional story that had me waiting a day or so before I could begin another book.

I anxiously await more books by Amanda Dykes and highly recommend this one.


Not only is this book part of my 2019 reading off my shelf challenge but also my best of 2019 list.
Posted by Margaret @ JustOneMoreChapter at 10:53 PM