Review: Someone We Know by Shari Lapena 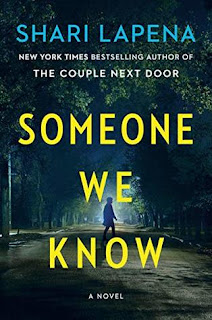 Maybe you don't know your neighbors as well as you thought you did. . .

"I'm so sorry. My son has been getting into people's houses. He's broken into yours."

In a quiet, leafy suburb in upstate New York, a teenager has been sneaking into houses--and into the owners' computers as well. Learning their secrets, and maybe sharing some of them, too.

Who is he, and what might he have uncovered? As whispers start to circulate, suspicion mounts. And when a woman down the street is found murdered, the tension reaches the breaking point. Who killed her? Who knows more than they're telling? And how far will all these very nice people go to protect their little secrets?

In this neighborhood, it's not just the husbands and wives who play games. Here, everyone in the family has something to hide. . .

You never really know what people are capable of.

My second book by Shari Lapena releases at the end of the month.

How far will a parent go to protect their child? As a parent, I know how far I’d go but watching someone else is an entirely different story.

Someone We Know is a book of secrets, oh its secrets!! It’s about relationships, insecurities and so much more. I wore my sleuth hat and was thoroughly invested. I will admit that sometimes these thriller 'gotta read' type books don’t always work for me and I'll also confess to being a picky reader especially when it to plausibility, anything too far fetched or unrealistic just ruins it for me.  I am happy to report that this one worked for me.

Someone We Know has many layers, many characters and at times had a Desperate Housewives feel. It’s a book that kept me guessing right till the end, there were many twists and turns and surprisingly not hard to keep straight. I read this in a matter of days and yes I did have to enlist my son to BBQ one night.

Heading back now to see what else Shari Lapena has written that I've missed.


My ARC was won from Doubleday on Twitter
Posted by Margaret @ JustOneMoreChapter at 11:31 AM